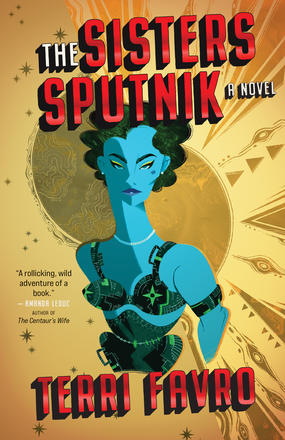 “Together, the Sisters Sputnik are the badassest kickass duo since Tank Girl and Jet Girl. If you like your speculative fiction sardonic, ... Read more

“Together, the Sisters Sputnik are the badassest kickass duo since Tank Girl and Jet Girl. If you like your speculative fiction sardonic, weird, sprightly, and intelligent, you will love this splendid book. ” — Candas Jane Dorsey, author of Black Wine and Ice and Other Stories

An odyssey wrapped in a love story, set in a near-future of artificial people

The Sisters Sputnik are a time-traveling trio of storytellers-for-hire who are much in demand throughout the multiverse of 2,052 alternate worlds. Each world was created by the detonation of a nuclear bomb in Earth Standard Time, home of the Sisters’ leader, aging comic book creator Debbie Reynolds Biondi, her 20-something apprentice Unicorn Girl, and their pop culture–loving AI, Cassandra. Tales of Earth Standard Time-That-Was, from World Wars to the space race to Hollywood celebrities, have turned the Sisters into storytelling rock stars.

In a distant reality where books and music have disappeared, Debbie finds herself in bed with an old Earth Standard Time lover who begs her to tell him a story. Over one long, eventful night, she spins the epic of the Sisters’ adventures in alternate realities, starting with the theft of a book of evil comic strips in a post-pandemic Toronto full of ghost kitchens and robot-worshipping lost children known as junksters, to a disco-era purgatory where synthetic people are sending humans into the past through a reverse-engineered Statue of Liberty, to a version of the 1950s where the Sisters meet a rising star named Frank Sinatra and his girlfriend, the once-and-future Queen of England.

Raised in Niagara wine country, Terri Favro grew up with an electrician father who worked with the first factory robot and built his own robots at home. The experience fueled Favro’s lifelong love of science fiction, comic books, and space exploration. A novelist, storyteller, essayist, and graphic novel writer, Favro is also an award-winning advertising copywriter who worked on campaigns for emerging technologies that changed the world. Terri lives in Toronto.

Once a year, I cross the border as a dead Canadian. Most recently, Gloria MacDonnell of Thorold, Ontario, a retired schoolteacher with no spouse, children or history of smuggling. According to the breadcrumbs of data she sprinkled all over the internet, she voted, volunteered, gardened, exercised in her condo gym and accumulated over $1. 5 million in investable assets. If Gloria had had a superpower, it would have been invisibility.

Her death no doubt came as a shock to those close to her. Not that anyone was.

Her obituary’s request for in-memoriam donations to an animal shelter, rather than, say, cancer research, hinted that Gloria’s passing was unexpected. Her travel documents are the last thing her grieving (and inconvenienced) next of kin will find time to cancel. She was the type of traveller who never triggered a random deportation or quarantine order. Why let such a pristine identity go to waste, when an undocumented migrant in the continuum of alternate worlds like me, can use it?

I send her name and vitals to my business manager and best friend Pasquale ‘Bum Bum’ Pesce, one of his many sidelines being postmortem identity theft. He does a digital switcheroo, substituting my faceprint and retinal scan for Gloria’s, and 3D-prints me a counterfeit NEXUS card. Bingo, I board a plane without so much as a blink of suspicion from the Fortress robots at the border.

Given the weather in Toronto, you might expect me to join my fellow snowbirds in sunny Sarasota or Phoenix, but no. I head to Fort Lee, New Jersey, home to the world’s largest community of migrants from alternate timelines. If you’re a fan of my comic book, Sputnik Chick: Girl with No Past, you know them as Exceptionals — or Twisties, to use the ugly term vomited up by racist trolls on Reddit and Twitter.

Exceptionals may look human, but their twisted strands of mutant DNA endow them with unusual powers, shape-shifting among them. The downside is that their bodies become unstable whenever they’re drunk, high or under stress, temporarily turning them into steaming piles of yeast enzymes or creeping carpets of slime mould. Despite these spontaneous mutations, Exceptionals flew under the radar until conspiracy theorists starting blaming them for the so-called ‘Twistie Flu. ’

To push back against the haters, a convoy of Exceptionals crams the George Washington Bridge every weekday morning, commuting to Columbia Medical School and other institutions of higher learning to research their own endlessly mutating bodies. A few have founded successful biotech companies. Not that their achievements have earned them much respect. On any given night, in cowboy bars in Paramus, Hackensack and Elizabeth, an Exceptional will shape-shift after a few too many Bud Lights and some neo-fascist yahoo will shout, “Go back where you came from, you filthy, disease-ridden alien!” Impossible, of course, since Exceptionals come from an alternate world that was destroyed long, long ago.

I should know; I’m the one who destroyed it.

“Time travelers, storytellers, and evolving synthetic beings lead Terri Favro’s tour de force novel … This rich, imaginative story is piled with threats both bygone and ongoing; it contains nostalgic callbacks to mid century dreams, but also an understanding of the dangers of nostalgia itself … The Sisters Sputnik is a multiverse tale unlike any you’ve read before. ” — Foreword Reviews

“This innovative setting is filled with surprises, including personality-laden AIs, robot-worshipping lost children known as junksters, and a robot plot to return everybody to the country and era of their ancestors’ migration to Canada, keeping the reader thoroughly engaged throughout. ” — Booklist Online

“Destined to become a sci-fi, pop culture classic, The Sisters Sputnik is sassy, smart, funny and sharp. A tilt-a-whirl through the ages, chronicled in Favro’s often hilarious and always insightful prose, with cameos by Sinatra and Elvis and a fabulously re-imagined Queen Elizabeth. We stop at Ellis Island, tour Toronto in loving detail and get to hang out at Studio 54. The novel deftly juggles the shifting cultures of generations past, present and future, seen through a steampunk lens — Terri Favro is sci-fi’s Douglas Coupland, chronicling our lives with a keen eye and taking the reader on a fabulous journey. ” — Lisa de Nikolits, author of The Rage Room

“Terri Favro’s writing hums with otherworldly power. Brighter than Technicolor, faster than Wi-Fi. How lucky we are to exist at the same time, on the same planet, as this book. The Sisters Sputnik is pure delight. ” — Paul Vermeersch, author of Shared Universe: New and Selected Poems 1995–2020

Other titles by Terri Favro