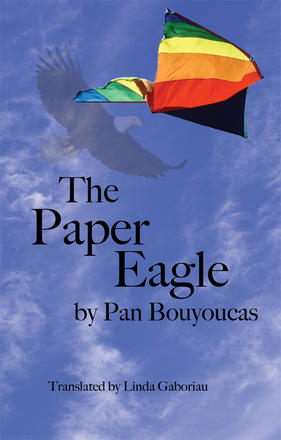 Dimitri is visited by his wife, his son, his brother, and finally his sexy, young Quebecois tenant. None of them can provide him with the answer he so desperately wants, not the least because he is incapable of finding the questions he needs to seek it. So he drinks and makes ... Read more

Dimitri is visited by his wife, his son, his brother, and finally his sexy, young Quebecois tenant. None of them can provide him with the answer he so desperately wants, not the least because he is incapable of finding the questions he needs to seek it. So he drinks and makes noise and rebuffs what offers of love are tendered and ignores the fights he provokes as the wind rises atop what soon turns into a Tower of Babel—until his wife Stella decides to fly her own kite.

Pan Bouyoucas is a Montreal prize-winning writer, playwright, and translator whose novels and plays have been translated into several languages. Two of his novels were written originally in English: The Man Who Wanted to Drink Up the Sea, which was selected by France’s FNAC as one of the 12 best novels of 2005, and The Tattoo, which was longlisted for the 2012 Re-Lit Award.

"This is the kind of play being done much too rarely in Quebec… a play in which style comes a distant second to substance… [Bouyoucas] tells a small story directly and with great intimacy… filling the stage with humanity and a surprisingly deft and manipulative use of language, both as a cultural barrier and as an all-too-limited tool of communication even between people who can understand the words, but not the meaning behind them… For an hour-and-a-half a world and its people are masterfully presented and the play's central lesson is extremely well taught, we often are, in the end, exactly who we say we are." —Theatrum Magazine

"Bouyoucas avoids all the old ethnic and immigrant clichés… creates characters as powerful and subtle and moving as the text itself… deftly brings to light the chasm between immigrant parents and their Canadian-born children…. You must see this show, if only to discover the cultural richness of Montreal." —La Presse

Other titles by Pan Bouyoucas