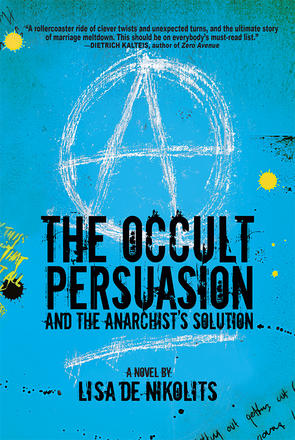 The Occult Persuasion and the Anarchist's Solution

The Occult Persuasion and the Anarchist's Solution

The Occult Persuasion and the Anarchist's Solution is about a couple experiencing a mid-life crisis. The husband loses his job as editor of a financial magazine. Neither are happy with their aging bodies. He seems to have gotten by with charm and frozen emotions. The wife has ... Read more

The Occult Persuasion and the Anarchist's Solution is about a couple experiencing a mid-life crisis. The husband loses his job as editor of a financial magazine. Neither are happy with their aging bodies. He seems to have gotten by with charm and frozen emotions. The wife has no idea how angry she is with him for his detachment. It is her idea to sell the house and just travel. But he is not coping well with retirement, so he simply walks off a ferry in Australia and leaves her. He steals a cat (well, he steals an expensive SUV that happens to have a cat onboard) and he flees Sydney, ending up in Apollo Bay, a few hours south-west of Melbourne, where he falls in with a group of anarchists and punk rockers in a tattoo parlour, planning revolution. Meanwhile, the wife sits tight in Sydney with no idea of where her husband might be or what happened. She moves into the red-light Kings Cross area, befriending the owner of the hostel, a seventy-year-old ex-cop drag queen from Saint John, New Brunswick, and waits to hear from her husband. When she learns that her husband is fine, consumed by wrath, she invokes the angry spirit of an evil nurse, a key player in the terrible Chelmsworth sleep therapy in which many patients died (historical fact). While Lyndon gets in touch with his original career ambition to become an artist and wrestles with anarchism and capitalism, Margaux gets in touch with her rage and meets people who can help her deal with it. A serio-comedic thriller about a post-retirement couple who embark on an unintentionally life-changing around-the-world adventure, The Occult Persuasion and the Anarchist's Solution is about the meaning of life, healing from old wounds, romantic love at all ages, and how with love and passion, we can make a difference, at any age.

Lisa de Nikolits has been hailed as "the Queen of Canadian speculative fiction" (All Lit Up) and is the international award-winning author of eleven novels. Her short fiction and poetry have been published in various international anthologies and journals. Lisa has appeared on recommended reading lists for both Open Book Toronto and the 49th Shelf, as well as being chosen as a Chatelaine Editor’s Pick and a Canadian Living Magazine Must Read. Her novel The Occult Persuasion and The Anarchist’s Solution, was longlisted for a Sunburst Award for Excellence in Canadian Literature of The Fantastic. The Rage Room (2020), was a finalist in the International Book Awards. She has lived in Canada since 2000. She has a Bachelor of Arts in English Literature and Philosophy and has lived in the U.S.A., Australia, and Britain. www.lisawriter.com

"Lisa de Nikolits sets readers on a rollercoaster ride of clever twists and unexpected turns. The Occult Persuasion and the Anarchist's Solution is a lot of fun and filled with some believable, yet zany characters. It bounces between the viewpoints of Lyndon and Margaux, a retired couple whose marriage speeds steadily downhill after Lyndon decides to call it quits and runs off. It's the ultimate story of marriage meltdown told in a style all Lisa's own, and this one should be on everybody's must-read list. "
--Dietrich Kalteis, author of Zero Avenue

"The Occult Persuasion and the Anarchist's Solution is a very adult Alice in Wonderland with a dash of The Conjuring: readers will be smiling one moment and breaking out in goose bumps the next. As one character succinctly points out, "Things come to light in the darkness. " Warm, witty, wildly imaginative and inspiring, The Occult Persuasion and the Anarchist's Solution puts the "joy" in joyride! Lisa de Nikolits is one of the most exciting authors in CanLit today and this funny, fearless new novel will not disappoint her fans. "
--Heather Babcock, author of Filthy Sugar (2020).

What a fabulous, gripping story The Occult Persuasion and the Anarchist's Solution is. A hugely consequential and restorative story, written with an unerring ability to draw the reader so completely into the riveting landscape. We bond with this band of humans we grow to care deeply about. This startling mutiny is at times unnerving--a full-tilt unravelling--mutating into magnificently odd odysseys--driven by catalysts that cut to the core--triggering an acceleration of angst born of stockpiled sorenesses--a deft and at times, disconcerting dismantling--a penetrating and powerfully probing dissection--a searing account of an impulsive and headlong escape from the numbing, succumbing of previously indiscernible accumulated hurts-- thus unleashing swathes of acute and unsettling undercurrents, made apparent as crucial core issues are laid bare--revealing the poignant dilution of individualism--of authenticity--mangled into societal masquerading--piercing and acute self-scrutiny as significant and unforeseen memories are dredged up-- revelling in this saga's spirited and gutsy guides and gurus, who pop up and prop up, to soothe, support, smooth, unravel and disconcert--presenting challenges--offering and initiating expanding perspectives--encompassing a myriad worldly and otherworldly issues and awarenesses--teeming with unanticipated and suspense-filled consequences. "
--Shirley McDaniel, Artist

"Lisa de Nikolits' imagination has a seemingly unlimited cast of colourful characters and she uses several of them to full effect in this, her latest look into her wonderous mind. Like rows of dolls on a shelf, Ms. de Nikolits picks a few at random, dresses them up and builds a fantastic story around them. Less rotten than Rotten Peaches, less furious than No Fury Like That, The Occult Persuasion and the Anarchist's Solution has more fun than No Fury Like That, but has its serious, introspective moments as well. An Oakville couple having a mid-life crisis in Australia is the stepping off point of another off Ms. de Nikolits' imaginative adventures, full of colourful characters and witty, but realistic dialogues about life, anarchy, capitalism and tattoos. "
--James Fisher, The Miramichi Reader

"Prepare for a wild and wondrous ride! The Occult Persuasion and the Anarchist's Solution is a page-turner like only Lisa de Nikolits can deliver. Featuring a cast of memorable characters--including a functionally dysfunctional family of four; a Maine Coon cat named Queenie; a former punk-hacker-turned-anarchist barber; an olive-eyed albino cross-dresser; and the malevolent ghost of a former psychiatric nurse--and set in the picturesque (and sometimes seedy) Australian cityscape, The Occult Persuasion and the Anarchist's Solution gives fans something to truly sink their teeth into, from start to surprising ending. Mark my words: After reading de Nikolits' latest tour de force, you'll never look at familial relationships the same way again. "
--Ruth Zuchter, author of The Mother Suite

"This cathartic and ultimately healing book conjures paranormal horror from historic events our collective consciousness would seek to gloss over, punk rock and rolling readers into a tumble of lapsed and bizarre behaviour that breaks a conventional marriage in two. As both players swirl into deep self-discovery, a supporting cast of eccentrics, gurus, bikers and a spirit medium guide the unceremoniously separated pair toward an intense crescendo where the forces of witchery are called into battle and freedom-loving values are jerryrigged to outlive life. "
--SK Dyment, author of Steel Animals