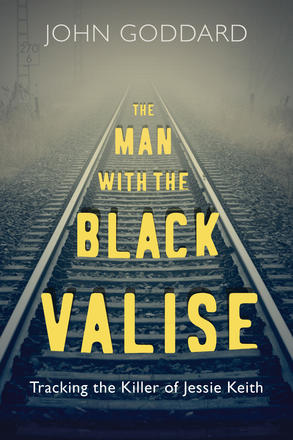 The Man with the Black Valise

The Man with the Black Valise

The story of one of the vilest murders in Canadian history.

One glorious autumn day in 1894, a drifter attacked thirteen-year-old Jessie Keith so violently that people thought Jack the Ripper must be loose in rural Ontario. To solve the crime, the government called in Detective ... Read more

The story of one of the vilest murders in Canadian history.

One glorious autumn day in 1894, a drifter attacked thirteen-year-old Jessie Keith so violently that people thought Jack the Ripper must be loose in rural Ontario. To solve the crime, the government called in Detective John Wilson Murray, the true-life model for Detective William Murdoch of the popular TV series Murdoch Mysteries. His prime clue was a black valise.

The Man with the Black Valise traces the killer’s trajectory through three counties, a route that today connects travellers to poignant reminders of nineteenth-century life. Chief among them stands the statue of the Roman Goddess of Flora, gesturing as though to cast roses onto Jessie’s grave.

John Goddard is an author, magazine writer, and former Toronto Star reporter. His books include Inside the Museums: Toronto’s Heritage Sites and Their Most Prized Objects and Rock and Roll Toronto, with pop critic Richard Crouse. John lives in Toronto.

Farmers parked their wagons outside the exhibition hall to deliver their oversized squashes and pumpkins. Rain fell intermittently. The grassy Ausable River flats glistened under low, luminous clouds. Wives carried in homemade butter, canned peaches, and stuffed birds. The next day was Opening Day of the North Middlesex Agricultural Fair, a harvest celebration that marked one of the year’s highlights for the village of Ailsa Craig, a rich farming and cattle centre outside London, Ontario. Only Christmas created more excitement. For the animal competitions, ranchers were preparing their best bulls and heifers. For the poetry recitals, children were rehearsing verses that began, “The Assyrian came down like the wolf on the fold. ” The only concern was for the racetrack. Rainwater was pooling at the lower turn, creating an expanse of mud that threatened to postpone the horse races, one of the fair’s top attractions.

Amédée Chattelle arrived at the fair by chance. He hadn’t known about it. He had been heading to northern Michigan to look for logging work but on hearing that prospects were poor had turned around at Sarnia, at the Ontario-U. S. border. From there, he had begun following mthe Grand Trunk Railway line east toward Toronto, or Ottawa, or maybe Saint-Hyacinthe, Quebec.

Chattelle was a wanderer, a tramp. He had not shaved for several weeks and his greying hair sprouted wildly from his head. His face bore the weathered, dissipated look of homelessness. A low forehead and thick, unexpressive lips lent an impression of dullness, contradicted by a cagey flicker to the eyes. Estimates of his age ranged from thirty-five to fifty. Although of average height, he looked particularly strong and muscular, even among farmers, with a broad back, deep chest, forward-curving shoulders, and thick, meaty hands — hands suggesting “great strength,” the newspapers later said. He appeared formidable but exuded an engaging manner. Some quality in him caused people to stop to talk to him and sometimes offer help.

In Ailsa Craig, one such person was Gordon McEwan, a boy of thirteen or fourteen, the son of a moulder at the local Alexander Brothers foundry. “A bright young boy,” the newspapers later called him. “An unusually bright lad. ”

“On October second I met a man near the fairground,” McEwan would confidently testify. “I had with me a walking stick which I had made out of the limb of a tree. I had some talk with the man and finally he asked me for the stick and I gave it to him. ”

The exact date was Tuesday, October 2, 1894. That evening, the rain resumed and Chattelle crossed the fairground to the train station and marshalling yards. He slept overnight in a boxcar, and in the morning another man woke him by climbing noisily into the same carriage. The man didn’t look like a tramp, Chattelle said later. He had money and was carrying a bottle of whisky. He gave Chattelle enough change to buy a second bottle, and the two of them started drinking.

“That is where I got drunk,” Chattelle said. “While I was drunk I got out of the car and lost the bundle of clothes somewhere. I had a pair of pants that belonged to my suit, and a pair of new suspenders, and undershirt and trousers; I don’t know where I hid it; I was tight. ”

Chattelle never found the extra clothes and never saw the other man again. About noon, he went looking for something to eat. The rain had stopped and the sun was coming out, perfect weather for the fair. He walked through a neighbourhood of large residential lots, many supporting both a house and a small barn for keeping horses and chickens, and perhaps a cow. At a quarter past one, Angus McLean, an engineer at the local Gunn & Co. flax mill, saw the tramp lying on the wet grass next to a walking stick.

“He asked me for a dime,” McLean testified. “I told him I thought he was drunk and did not deserve it. ” McLean told Chattelle to move on and he rose unsteadily to his feet. Not long afterward, four blocks away, McLean passed him again, standing with the walking stick in front of Donald and Isabella McLeod’s house. The engineer continued on his way and the drifter crept unseen around the back.

The McLeods, it turned out, had left home a few minutes earlier to attend the fair. Chattelle broke a window, climbed in, and once he had found something to eat started rifling through a chest of drawers containing Mrs. McLeod’s clothes and toiletries. He needed to replace his lost trousers and undershirt, but was drawn instead to the female articles. He was still drunk. He tried on a white petticoat, or woman’s underskirt, along with a navy-blue skirt and a black cashmere waistcoat, or vest, trimmed with flowered satin brocade. On his head, he placed a black bonnet and veil, decorated with small black ostrich-feather tips and a row of jet around the rim. In addition, he picked out a brush and comb, several bars of soap, a white apron, an old pair of girl’s shoes, a second white petticoat that matched the first one, and a man’s black cloth Glengarry cap, or tam-o’-shanter, with a red tassel. He also commandeered a small black suitcase, or valise. Into the bag he put everything he wasn’t wearing. On his way out of the house, he left the walking stick next to the cellar door and picked up a green, or possibly blue, umbrella. He later spoke of the break-in this way:

I went from one house to another and when I came to this house, there was no one in, so I walked in. The woman can’t have been long gone. There I dressed myself up in full uniform, right in the house; in the woman’s uniform, right out and out, the whole business; took it from the bureau and walked right out with it, and put my own clothes in the satchel. I had the green umbrella over my head, and my whiskers were longer than they are now. I passed right through the crowd at the Fair.

Young Gordon McEwan spotted him and recognized him from the day before. “I saw him coming from the bush not very far from Mrs. McLeod’s house,” the boy said. “He was then dressed in women’s clothes. He had on a woman’s bonnet and veil and a black [navy-blue] skirt. I don’t think he had on the waist. He was carrying a valise and a blue umbrella. I had no difficulty in telling who he was, for although he had on women’s clothes anybody could see that he was a man. Mr. Fraser also saw him and so did two little girls who were very much frightened by his appearance. ”

Chattelle climbed a fence onto the railway tracks. He tore the white apron into strips and threw them away, along with the umbrella. Still dressed in Mrs. McLeod’s clothes and bonnet, he continued east along the tracks toward Lucan, the next village.

Those who enjoy mysteries will appreciate the unconventional nature of this volume.

A tragic and dark story both fascinating and enlightening. Highly recommended.

Other titles by John Goddard