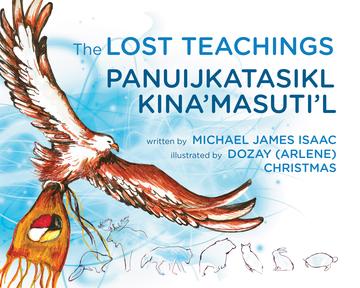 One day as the great Eagle flew high above the forest he came upon a small bundle containing seven teachings, teachings that will bring balance harmony and peace to all who practice them. But the teachings come with a simple warning: beware of envy and greed. As Eagle spreads ... Read more

One day as the great Eagle flew high above the forest he came upon a small bundle containing seven teachings, teachings that will bring balance harmony and peace to all who practice them. But the teachings come with a simple warning: beware of envy and greed. As Eagle spreads the seven teachings throughout the forest, he forgets to heed their warning and soon the forest is lost to jealousy, greed and selfishness. Eagle must save the forest, and he soon learns the most important teaching of all: truth. “When you see Eagle flying high in the beautiful sky above, ask yourself this: Am I proud of myself? Have I respected myself, others, and the environment? Have I stood up for someone and stood up for what is right? Have I practiced the teaching of truth?”This engaging story, with beautiful illustrations by Dozay (Arlene) Christmas, allows the reader to reconnect to and understand the seven teachings and their meaning in relation to themselves and society as a whole. The Lost Teachings is a story about the importance of the seven teachings — wisdom, respect, love, honesty, humility, courage and truth — and how interconnected they are in achieving balance, harmony and peace for individuals and society as a whole.

Michael J. Isaac is Mi’kmaw from the Listuguj First Nation. Michael began his career as a law enforcement officer, serving his community for ten years and later four communities in Cape Breton for an additional three years. After leaving law enforcement, Michael attended university, obtaining a B.A. from Cape Breton University as well as a B.Ed. and M.Ed. from St. Francis Xavier University. Michael also worked for various federal departments in Ottawa including as an analysist for the Canadian Security Intelligence Service (CSIS). He was a grade five teacher for the Cape Breton Victoria Regional School Board for seven years and a consultant for the Department of Education in Nova Scotia for two years. Michael is an advocate for Indigenizing curriculum within the public and First Nation school systems. He has instructed university courses at Acadia, Cape Breton University and McGill. Michael is presently principal of New Richmond High School within the Eastern Shores School Board, Quebec. He is the author of two books published in English and Mi’kmaw which speak to the importance of identity, acceptance and experiences of Indigenous peoples — How the Cougar Came to be Called the Ghost Cat / Ta’n Petalu Telui’tut Skite’kmujewey and The Lost Teachings / Panuijkatasikl Kina’masuti’l. Both books are also published in French and Mi’kmaw as Comment le Puma a fini par être appelé le Chat Fantôme / Ta’n Petalu Telui’tut Skite’kmujewey and Les Savoirs Perdus / Panuijkatasikl Kina’masuti’l. The Anglophone and Francophone school boards within Nova Scotia and New Brunswick have embraced the books, which provide many lessons and have included them as resources for their curriculum.

Dozay (Arlene) Christmas has spent much of her life cultivating her passion for art. Growing up in western New Brunswick on the Tobique Reserve, Dozay is the middle child of a large family. At eighteen, she left the banks of the Tobique to pursue formal education at NSCAD, and although she had always displayed an interest in art, her intention had initially been to pursue a career in education. It wasn’t until her third year at NSCAD, with encouragement from several important individuals, that Dozay decided to switch to the fine arts program and pursue a full-time career as an artist. Since making that decision, Dozay has created and displayed her artwork at galleries and exhibits across the Maritimes, Ontario and the United States.

”Once again, Michael James Isaac and Dozay Christmas have demonstrated that art and story telling are important means for promoting love of one’s own culture and appreciation across cultures. This beautifully illustrated and wonderfully told narrative is a valuable resource for helping children, and adults, grow in ways that claims and reclaims a balance among individual, community, and societal character building. ” — Randall B. Lindsey, California State University

Other titles by Michael James Isaac

Other titles by Dozay (Arlene) Christmas