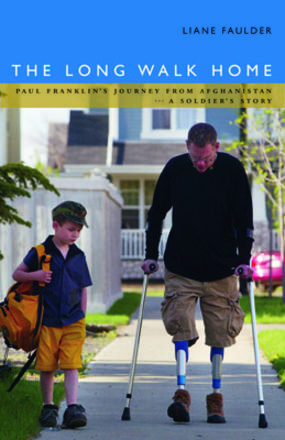 The Canadian media were the first to bring Master Corporal Paul Franklin's story to the public, and it is only fitting that award-winning journalist Liane Faulder brings the full account of his return from a war zone. The Long Walk Home: Paul Franklin's Journey from Afghanistan ... Read more

The Canadian media were the first to bring Master Corporal Paul Franklin's story to the public, and it is only fitting that award-winning journalist Liane Faulder brings the full account of his return from a war zone. The Long Walk Home: Paul Franklin's Journey from Afghanistan documents the recovery of a soldier injured in a 2006 suicide bombing that left one Canadian diplomat dead, and two comrades in arms wounded. Although Franklin made a promise to his wife that he would come home alive, he needed the heroic help of soldiers on the scene and a medical team abroad to keep his word. He lost both of his legs above the knee as the result of his injuries, but returned home determined to walk again. Within four months of his injury, and against the odds and predictions of doctors, Franklin learned to walk on artificial legs. He continues to represent the courage of Canadian troops overseas as he rebuilds his life at home with his wife Audra and their young son, Simon. As a family on a journey to recovery, they are determined to stand, and walk, together. The Long Walk Home: Paul Franklin's Journey from Afghanistan is a story of loss, courage, love and hope. It inspires all of those — military and civilians alike — who wonder how they will take that next step when tough times challenge the body and the spirit.

In 2007, Liane was awarded the prestigious Canadian Journalism Fellowship at Massey College, University of Toronto. In 2000, she won the Dateline Hong Kong fellowship, awarded by the Hong Kong Economic Trade office. A graduate of Ryerson University's school of journalism, Liane has worked at CBC radio and CBC television and has long been a regular contributor to CBC's local and syndicated national service.

An award-winning reporter, Liane's feature articles have been published in Reader's Digest, Today's Parent, Venture and Chatelaine magazines. In 2006, her personal essay, "About the Boys," was published in the best-selling Canadian anthology, Dropped Threads 3. Her first book, The Long Walk Home: Paul Franklin's Journey from Afghanistan, was published in 2007.

A truly inspiring tale of strength and courage in the face of unimaginable adversity. Get to know Paul Franklin. This is an amazing story. —Rick Mercer

This book is a narrative triumph over despair. Paul Franklin’s courage and determination serve as a example of what can be overcome. People who face traumatic circumstances can only be encouraged by this example. —Romeo Dallaire, Lieutenant-General (Retired)