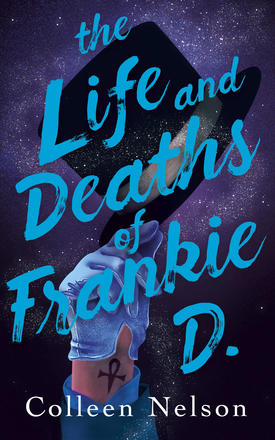 The Life and Deaths of Frankie D.

The Life and Deaths of Frankie D.

A fantastical novel from award-winning author Colleen Nelson, about a hundred-year-old side show and a girl with no past.

Frankie doesn’t trust easily. Not others and not even herself. Found in an alley when she was a child, she has no memory of who she is or why she was left ... Read more

A fantastical novel from award-winning author Colleen Nelson, about a hundred-year-old side show and a girl with no past.

Frankie doesn’t trust easily. Not others and not even herself. Found in an alley when she was a child, she has no memory of who she is or why she was left there. Recurring dreams about a hundred-year-old carnival side show, a performer known as Alligator Girl, and a man named Monsieur Duval have an eerie familiarity to them.

Frankie gets drawn deeper into Alligator Girl’s world and the secrets that keep the performers bound together. But a startling encounter with Monsieur Duval when she’s awake makes Frankie wonder what’s real and what’s in her head.

As Frankie’s and Alligator Girl’s stories unfold, Frankie’s life takes a sharp turn. Are the dreams her way of working through her trauma or is there a more sinister plan at work? And if there is, does she have the strength to fight it?

Colleen Nelson is a teacher and an award-winning YA author whose novels include Spin, Sadia, Blood Brothers, and Finding Hope. She lives in Winnipeg.

“Frankie?” Mr. Kurtis stared down at me. “You okay?” The bell had gone for next period, but I hadn’t moved.

I took a breath. “Yeah. Just thinking about something. ” Between my long skirt, my clunky black boots, and Max’s weird behaviour, I wobbled a little getting to my feet.

“Yeah. Hey, uh, that kid, the new one who came to class with me. Do you know anything about him?”

If he told me there wasn’t a new kid, I was going to pass out. What if Kris was right and all the crap I’d gone through as a kid had come back to haunt me? Maybe I was having a psychotic break or something. Panic rose in me as I waited for Mr. Kurtis to respond. “He sat beside me in class,” I said, to jog his memory.

I gave a relieved exhalation. “He looked familiar. Do you know what school he used to go to?”

Mr. Kurtis shook his head. “I didn’t even know I was getting a new student. ”

Except for a few stragglers, the hallway was empty.

“You’d better get to class. ” He wrote something on a piece of paper and handed it to me with a grin. “Say it’s my fault you’re late. ”

I looked for Max for the rest of the week. Scoured the cafeteria, the halls, the library, the stoner hangout doors — anywhere I thought he might go. Every kid wearing a hoodie got a second glance, but I never found him.

If he was a foster kid, it was possible he’d been placed with a new family. Sometimes there was no warning. The social worker just showed up, and as soon as you were packed up, you left. Maybe that was what had happened to Max.

But his disappearance had left me with questions. How had he known my real name? And why did we both dream about the same person? Max had said the man’s name was Monsieur Duval, but how did he know that? The whole thing irked me.

All week, the dream kept coming, but small things changed each night. Sometimes I woke up with an extra detail still clear in my head. I got in the habit of leaving my sketchbook on my nightstand. With the image fresh in my mind, I’d reach for my sketchbook and draw whatever I’d seen in my dream. This morning, Monsieur Duval, as I’d come to think of him, had held his arms up in the air, as if to draw the audience’s attention. He’d had an Egyptian ankh tattooed on his wrist. It seemed like a strange choice for a man like him.

I caught myself. I was thinking about him as if he were real, filling in his personality where there was none. I didn’t know anything about him. Why would I know what kind of tattoo he would get?

Readers who zero in on Frankie will likely find her memorable long after all the rest has faded.

Author Nelson has created an intriguing and original story that touches not only on the play between the supernatural and reality, but also connects with real-life issues of young people, especially issues of trust, fitting in, and finding friendships. This novel is highly recommended.

The Life and Deaths of Frankie D. is a powerful, genuinely creepy novel rooted in well-developed characters and vivid imaginative leeps . .. an immersive and utterly pleasurable read.

Full of ancient Egyptian curses, time travel, and high school mean girls, The Life and Deaths of Frankie D. is an intriguing puzzle box of a mystery as well as a powerful statement about human connection and empathy. Highly Recommended.

Fans of fantasy and paranormal will find The Life and Deaths of Frankie D. difficult to put down and a resilient protagonist worthy of their attention.

Nelson has crafted a magical realism story that will keep readers wondering until the end . .. Readers who like mysteries and a little bit of magic will enjoy this one.

Frankie's voice is authentic, strong when needed, confused when vulnerable, and always real . .. Colleen Nelson makes us care, and shows us that we can be hopeful that Frankie will get the life she deserves, unencumbered by those who deem to use her to get the lives they desire.