The Life and Art of Arthur Pitts

The Life and Art of Arthur Pitts

Arthur Pitts (1889-1972) was born in London, UK, in the Edwardian age and pursued a career of art and adventure, first in South Africa, then Canada. His fascination with indigenous cultures, led him to travel over 4,000 miles in British Columbia and Alaska, producing a large ... Read more

Arthur Pitts (1889-1972) was born in London, UK, in the Edwardian age and pursued a career of art and adventure, first in South Africa, then Canada. His fascination with indigenous cultures, led him to travel over 4,000 miles in British Columbia and Alaska, producing a large body of watercolours and sketches that focused on Coast Salish, Nuu-Chah-Nulth, Kwakwaka’wakw, Haida, Tlingit and Ktunaxa First Nations. Pitts also created entire series of landscapes, portraits and architectural subjects, commercial work and hundreds of cartoons for Punch magazine. Pitts’ fascinating story includes life as an artist in Vancouver in the 1920s and 1930s, where he attended the Vancouver School of Art, studying under Fred Varley, Charles Scott and J. W.G. Macdonald; WWI trench warfare and a host of “struggle and prevail” adventures. He lived for over 30 years in Saanichton. His work is in private collections, the Royal BC Museum and the Glenbow Museum.

Kerry Mason BA, MA is an art historian, author, curator and art consultant who lectures at the University of Victoria, University of Colorado, Victoria College of Art and Vancouver Island School of Art, with an emphasis on Emily Carr and Indigenous Arts of the NW coast. Her publications include, Sunlight in the Shadows: The Landscape of Emily Carr.

Arthur Pitts took pleasure in recording his surroundings in watercolour during an era of black-and-white photographic documentation: Indigenous dancers bursting with energy in dimly lit interiors; portraits of Indigenous people as individuals rather than romantic archetypes; rustic buildings in pastoral landscapes; his first wife, Peggy, in tranquil, intimate sketches. Pitts left a record of time and place that continues to speak to us a lifetime later.

Kerry Mason has done us all a great favour by bringing this overlooked and unrecognized artist to life with such passion, conviction, and expertise. The remarkable life and work of Arthur Pitts will be welcomed by the W_SÁNEC (Saanich) people, and by many others in British Columbia and the Pacific Northwest, including cultural historians, art historians, and ethnographers.

Arthur Pitts was a determined and talented artist who found his subject in contemporary Indigenous communities in British Columbia in the 1930s. He was not the first nor the last newcomer to do this, but as Kerry Mason's biography reveals, Pitts paid more attention than most. He spent time with the individuals he painted, and he was willing to learn from them.

— Susan Crean, author of The Laughing One: A Journey to Emily Carr 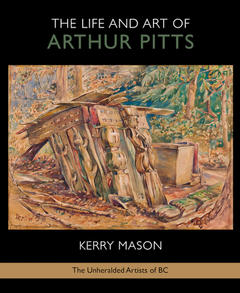 Where in Canada: Travelling by Paintbrush through the Reserves in British Columbia

The latest instalment of Mother Tongue Publishing's The Unheralded Artists of BC series is  The Life and Art of Arthur Pitts by Kerry Mason, a chronicle of his iconic watercolours painted all over British Columbia. While successful commercially as an illustrator and art teacher, ... Read more