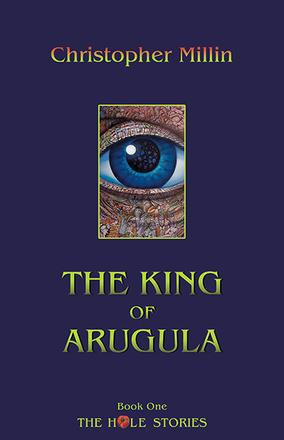 The King Of Arugula

The King Of Arugula

With a nod to Tim Burton's wit, Millins "stories from the hole" offer the wild ride of two ten-year-olds destined to set the record for having the pants scared off them.

With a nod to Tim Burton's wit, Millins "stories from the hole" offer the wild ride of two ten-year-olds destined to set the record for having the pants scared off them.

This macabre adventure abounds with non-stop creepiness and features a memorable crew: a vicious hyper monkey, plagues of locust, museums of human legs, and a tomato-growing, one-eyed giant with a deliciously evil plan. The story's narrator, is trapped in a nasty hole with the strange Mr. Flex who recounts the quest of Twig to restore the sight of his friend, Onus. With the help of Twig's sister's ghost, Isis, and the green-haired, tattooed punker, Clay, the boys set out to find the magic tomato of Arugula and must defeat the evil intentions of the villainous leg collector William Ernest Fang.

On my way home from Uncle Sol's funeral I fell into a hole.At the bottom of this hole I met a man named Richard Englebert Flex. I could not see Mr. Flex, because the hole was deep and when you're at the bottom of a deep hole it is usually quite dark; but I could smell him. He smelled of time. He smelled the way any person would smell had they gone several days without deodorant and a proper place to go to the washroom."You hear that," his first words were to me."I'm sorry.""That's the sound of the worms and the spiders sharpening their knives.They are waiting for me to die. They smell it. They smell death and now they are preparing themselves for the feast they believe is close at hand. There is a great battle going on here, and I am not about to lose it."There was silence after that. There was a long silence.