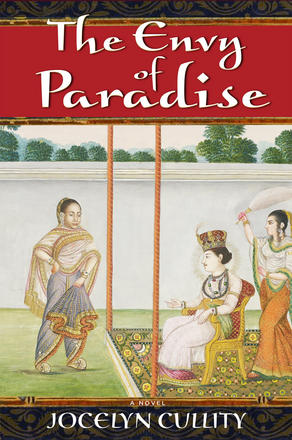 The Envy of Paradise

The Envy of Paradise

In 1858, the British took over the city of Lucknow, paving the way for Queen Victoria's reign over India. But what happened to Begam Hazrat Mahal, the woman of African-Indian descent who had valiantly organized a final key resistance to British rule, and to her ex-husband, Wajid ... Read more

In 1858, the British took over the city of Lucknow, paving the way for Queen Victoria's reign over India. But what happened to Begam Hazrat Mahal, the woman of African-Indian descent who had valiantly organized a final key resistance to British rule, and to her ex-husband, Wajid 'Ali Shah, the last King in India, who remained imprisoned by the British? The Envy of Paradise tells their stories.

Jocelyn Cullity's English family lived in India for five generations. A sequel to the award-winning Amah & the Silk-Winged Pigeons, her second novel about the takeover of India by Britain is an exquisitely told tale of 19th-century India -- a deep rendering of the moment that India as a country was colonized; a brilliant illustration of Hazrat Mahal's fearless character and the depths of betrayal the last King in India faced.

Jocelyn Cullity is the author of Amah and the Silk-Winged Pigeons, a literary / historical novel based on ten years of research that highlights the lost history of the women who fought against the English during the 1857 uprising in Lucknow, India. Cullity's English family lived in India for five generations. Her short stories and essays have been published in American, Canadian, and Indian journals and anthologies; her award-winning documentary film about women and social change in China, Going to the Sea, aired on television and in festivals in Canada, the United States, and in Europe.

"A footnote to the Indian Mutiny is here enlarged, polished like a jewel, and presented in a dazzling story of resistance against British domination. Loss of personal liberty is set against loss of a kingdom in a subtle and evocative narrative. Warmly recommended."
-- Rosie Llewellyn-Jones, author of The Great Uprising in India 1857-1858 and The Last King in India

"In this luscious and touching sequel to Amah and the Silk-Winged Pigeons, we follow Wajid 'Ali Shah, the last King in India, and his ex-wife Begam Hazrat Mahal, as "the world of the past dissolves." What Jocelyn Cullity has accomplished is the astonishing re-imagination of a time and place, as well as compelling historical characters, that come richly present to our senses. We smell and taste this world. We wear, and relinquish, its jewels. We grieve and rage against its losses."
--Janet Burroway, author of Writing Fiction and Raw Silk

"I was a huge fan of Amah & the Silk-Winged Pigeons and so it was with delight to find that Jocelyn Cullity's thrilling sequel, The Envy of Paradise, continues this important story with the same vivid impact."
--Christopher Castellani, author of Leading Men and The Art of Perspective: Who Tells the Story

"Jocelyn Cullity's powerful novel, The Envy of Paradise, illuminates a dark period in India's history. A riveting story of the fall of Lucknow to British imperialism, sensually told through the eyes of Begam Hazrat Mahal and her estranged husband, King Wajid 'Ali Shah as they attempt reclamation of their heritage. Cullity gives a taut, dramatic account of what it means to endure loss."
--Catharine Leggett, author of In Progress and The Way to Go Home

"The Envy of Paradise tells the little-known story of what happened to those who fought domination by the English in India right up until the bitter end of what some call the first fight for independence in 1858, the year Queen Victoria announced her reign over India. Cullity's novel is a sensual rendering of an essential part of India's history-an important read!"
--Hena Ahmad, author of Postnational Feminisms: Postcolonial Identities and Cosmopolitanism in the Works of Kamala Markandaya, Tsitsi Dangarembga, Ama Ata Aidoo, and Anita Desai

Other titles by Jocelyn Cullity