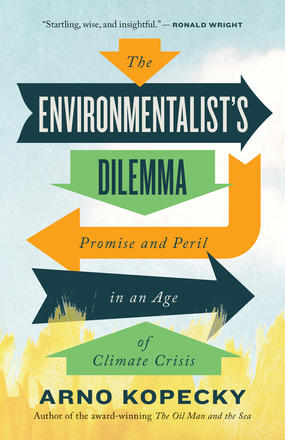 From the winner of the 2014 Edna Staebler Award comes a lively, intelligent and nuanced discussion of climate change — a hopeful ... Read more

From the winner of the 2014 Edna Staebler Award comes a lively, intelligent and nuanced discussion of climate change — a hopeful take on how to live knowing disaster is imminent

In The Environmentalist’s Dilemma, award-winning journalist Arno Kopecky zeroes in on the core predicament of our times: the planet may be dying, but humanity’s doing better than ever. To acknowledge both sides of this paradox is to enter a realm of difficult decisions: Should we take down the government, or try to change it from the inside? Is it okay to compare climate change to Hitler? Is hope naive or indispensable? How do you tackle collective delusion? Should we still have kids? And can we take them to Disneyland?

Inquisitive and relatable, Kopecky strikes a rare note of optimistic realism as he guides us through the moral minefields of our polarized world. From start to finish, The Environmentalist’s Dilemma returns to the central question: How should we engage with the story of our times?

Arno Kopecky is an environmental journalist and author whose dispatches from four continents have appeared in the Globe and Mail, The Walrus, the Literary Review of Canada, Reader’s Digest, and others. His last book, The Oil Man and the Sea, chronicled the battle to keep oil tankers out of British Columbia’s Great Bear Rainforest and was shortlisted for the 2014 Governor General’s Award. He lives in Vancouver, British Columbia.

In summer 2018, a killer whale known as Tahlequah gave birth to a calf that died half an hour later; overcome by grief, Tahlequah refused to let her baby go and instead carried it with her, raising the body above the surface as though to help it breathe, over and over again, for 17 days.

Seventeen days. Nobody could have been astonished to learn that orcas are struggling to survive in these industrialized waters, but the prolonged image of an animal so clearly deranged by grief did something that anyone who’s ever tried to write a story or start a movement knows the value of: It turned knowledge into feeling.

Everyone knows that our oceans are in trouble. Everyone knows whose fault that is. Humans didn’t kill Tahlequah’s child directly, but we are very much the reason why her community is on the brink of extirpation, down to less than eighty individuals as of this writing. Hounded by whale-watchers and pollution and crashing salmon populations and a degree of acoustic agony no human can fully comprehend, the Southern Residents’ suffering is both a tragedy and a cautionary tale.

And this is where the moral disaster becomes an existential crisis. Even if your cold, anemic heart is unmoved by the Tahlequahs of the world, there are perfectly selfish reasons to protect them and their habitat. Forget about killer whales. An ocean with more plastic than fish won’t be an endless source of protein. Slaughtering the world’s pollinating insects isn’t a great agricultural strategy. Throw in the global depletion of potable freshwater, hypervolatile weather bringing ever more droughts, fires, floods, and hurricanes, plus, oh I don’t know, rising sea levels set to displace one or two billion coastal inhabitants before the end of the century, and it all becomes — like nothing else but nuclear war — too much to contemplate.

Has it ever been easier not to? The grocery stores in which I’ve foraged all my life suggest ever more abundance and diversity from one year to the next. That message, and countless others like it, hits me on a far more visceral level than any data-driven communique from the United Nations Framework Convention on Climate Change. Today’s music is so excellent, the television so sophisticated, our opportunities so unlimited, that it’s harder than ever to feel the moral, mortal peril that we’re in.

It’s like we’ve turned Noah’s Arc into a humans-only party yacht and sailed it to the edge of Niagara Falls. There are a million distractions aboard, but only three options as far as the waterfall goes. You can struggle against all odds to turn the ship around, stare numbly into the abyss, or turn your back and dance.

My personal adaptation is to ricochet erratically between all three. But on those days when I’m going with the first one, standing on the dance floor shouting, guys, guys, I take a certain solace from the fact that, lately, more of us are waving our arms.

“Startling, wise, and insightful, The Environmentalist’s Dilemma goes into the fraught relationship between nature and civilization. With his wide experience, well-stocked mind, and the fun and deftness of his writing, Kopecky helps us face the threats that face our world. ” — Ronald Wright, author of A Short History of Progress

“Should one enjoy reading about the climate emergency? That’s the dilemma I faced reading Arno Kopecky’s earnest, nuanced, and funny new book. From the quagmire of Canadian petropolitics to COVID-19’s impact on the environmental movement, Kopecky captures the current moment of whiplash and dysfunction perfectly. The Environmentalist’s Dilemma unpacks the most worrying issues plaguing the environmental movement while setting out a way forward for the difficult days ahead. ” — Laura Tretheway, author of The Imperilled Ocean

“The Environmentalist’s Dilemma is far funnier than a book contemplating apocalypse ought to be, and Arno Kopecky is far wiser than a journalist just hitting middle age ought to be. Every sentence in here is perfect. Every new page opens your mind a little more, until you’re contemplating American tribalism or Extinction Rebellion or the nature of truth or the velocity of time. As a reader, I’d follow Kopecky anywhere. Even — just this once — to Disneyland. ” — McKenzie Funk, the PEN Literary Award-winning author of Windfall

“The expansiveness of the dilemma that frames these essays — the world is dying yet human life seems by many metrics to be better than ever — allows Kopecky to write with unfailing verve on a vast array of topics … these essays are consistently stimulating and often moving, sometimes deeply so … In the author’s hands, the book’s titular dilemma emerges in all its richness, ambiguity, and tension as a foundational opportunity and challenge for contemporary environmentalism. ” — Literary Review of Canada