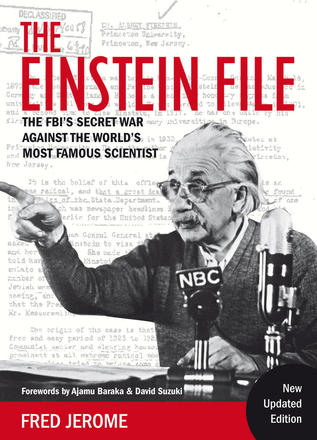 Einstein arrived in the United States in 1933, the year the Nazis rose to power in Germany. From that moment until he died in 1955, J. Edgar Hoover’s FBI—with other agencies—feverishly collected “derogatory information” to undermine the renowned scientist’s influence ... Read more

Einstein arrived in the United States in 1933, the year the Nazis rose to power in Germany. From that moment until he died in 1955, J. Edgar Hoover’s FBI—with other agencies—feverishly collected “derogatory information” to undermine the renowned scientist’s influence and destroy his reputation. With material accessed under the Freedom of Information Act, Fred Jerome reveals the depth of, and the reasons for, this massive anti-Einstein campaign. He also uncovers Einstein’s strong political commitments that have been conveniently buried under the image of the absent-minded icon genius. Whereas Einstein said on several occasions, “My life is divided between equations and politics,” Jerome delves into his little-known political half-life. Einstein, Hoover… Trump Jerome’s preface to this new enriched edition of The Einstein File, traces the path of surveillance from J. Edgar Hoover, through McCarthyism, to the Trump era. The preface also presents new information gathered about the things that the FBI hated so much about Einstein: his very close friendship with Paul Robeson and their collaboration in fighting racism; and his studied position on Israel and Zionism that Israeli polticians do everything to hide.

Dr. David Suzuki has made it his life's work to help humanity understand, appreciate, respect and protect nature. A scientist, broadcaster, author, and co-founder of the David Suzuki Foundation, he is a gifted interpreter of science and nature who provides audiences with a compelling look at the state of our environment, underscoring both the successes we have achieved in the battle for environmental sustainability, and the strides we still have to make. Both inspiring and realistic, he offers leading-edge insights into sustainable development and model for a world in which humanity can live well and still protect our environment.

He is familiar to television audiences as host of the CBC science and natural history television series The Nature of Things, and to radio audiences as the original host of CBC Radio's Quirks and Quarks, as well as the acclaimed series It's a Matter of Survival and From Naked Ape to Superspecies. David was the recipient of The Canadian Academy of Cinema and Television's 2020 Lifetime Achievement Award.

An award-winning writer and former faculty member of Harvard University, Tara Cullis has been a key player in environmental movements in the Amazon, Southeast Asia, Japan and British Columbia.

Tara has been adopted and named by Haida, Gitga’at, Heiltsuk, and Nam’gis First Nations.

Miriam Fernandes is a Toronto-based artist who has worked as an actor, director, and theatre-maker around the world. Recent directing and creation credits include Hayavadana (Soulpepper Theatre), Nesen, (MiniMidiMaxi Festival, Norway) The First Time I Saw the Sea (YVA Company, Norway). She is currently is co-writing/adapting for the stage the ancient epic, Mahabharata (Why Not Theatre/Shaw Festival), is developing a Deaf/hearing production of Lady Macbeth (in partnership with 1S1 Collective), and is the co-writer of What You Won’t Do for Love with Drs. David Suzuki and Tara Cullis. Miriam is the recipient of the JBC Watkins Award and was nominated for the inaugural Johanna Metcalf Performing Arts Prize. She is also the co-artistic director of Why Not Theatre and has trained with Anne Bogart’s SITI Company, and is a graduate of École Internationale de Théâtre Jacques Lecoq in Paris.

Toronto-based stage director Ravi Jain is a multi-award-winning artist known for making politically bold and accessible theatrical experiences in both small indie productions and large theatres. As the founding artistic director of Why Not Theatre, Ravi has established himself as an artistic leader for his inventive productions, international producing/collaborations and innovative producing models which are aimed to better support emerging artists to make money from their art.

Ravi was twice shortlisted for the 2016 and 2019 Siminovitch Prize and won the 2012 Pauline McGibbon Award for Emerging Director and the 2016 Canada Council John Hirsch Prize for direction. He is a graduate of the two-year program at École Internationale de Théâtre Jacques Lecoq. He was selected to be on the roster of clowns for Cirque du Soleiiel. Currently, Sea Sick, which he co-directed, will be on at the National Theatre in London, his adaptation of The Indian epic Mahabarata will premier at the Shaw Festival, and What You Won’t Do For Love, starring David Suzuki will premier in 2021.

“This carefully researched and reported account of Einstein’s surveillance by the FBI adds, new, what Einstein might call ‘dimension,’ not only to his personal history but maybe even to our own present-day character as a nation, conceived as it was in the moral vacuum of the McCarthy era, shaped by the Cold War and too many ill-conceived adventures overseas, come to maturity in this current precarious hour. Sometimes what worries the FBI can also serve as a clue to what, somewhere back in our national soul, lingering and toxic, has been eating away at us. In redeeming from the forces favoring general amnesia this essential set of connections, Fred Jerome has given us back a piece of our history, and hopefully of our conscience as well. ” —Thomas Pynchon, Novelist

Review by Choice Review “Using the more than 1,800 pages in the file that the FBI maintained on Albert Einstein, Jerome (Syracuse Univ. ) has crafted a cautionary tale of government excesses during the Cold War era. Einstein became the target of J. Edgar Hoover's FBI because of his pacifism and his connection with "Red front" organizations. The FBI monitored the scientist's phone calls, opened his mail, and rooted through his garbage in an attempt to uncover evidence that Einstein was an active communist agent. Their efforts were in vain. Some of the material in the FBI's file can only be labeled as ludicrous, although it had serious consequences. In addition to exposing the lengths to which the FBI was prepared to go during the height of the Cold War, Jerome also examines Einstein's political activism, refuting the portrait of the benign, absent-minded professor that has emerged in the years since the scientist's death. Although the author is inclined to see things in terms of black and white, with Einstein elevated to heroic status, his book nonetheless provides a vivid portrait of the McCarthy-Hoover years, as well as a reminder of the continuing problems confronting civil liberties in a national security state. All levels. ” W. M. Leary University of Georgia Library Journal Review “It is not surprising that J. Edgar Hoover's FBI spied on Albert Einstein from 1933 to his death in 1955. As this well-done study makes clear, the famous scientist was also a social and political activist with strong pacifist and Socialist leanings. Einstein publicly supported the civil rights and anti-lynching movements and was a friend of leading African Americans. Unafraid, he was willing to denounce Joseph McCarthy and encouraged others to refuse to testify before him. These activities, plus his role in the development of nuclear weapons, led Hoover to investigate Einstein in search of "derogatory information," hoping to discredit and eventually deport him. While Hoover wanted to discover that Einstein was a Communist, his agents also collected crazy stories such as that one of Einstein's children was held hostage by the Soviets. Journalist Jerome uses Einstein's 2000-page FBI file plus interviews with people familiar with the case to tell this story. Perhaps the most useful aspect of this excellent book is that it reminds readers of the less-celebrated aspect of Einstein's character: he was ready and willing to participate in the political arena. ” Harper's Magazine "A highly readable book -- investigative journalism that qualifies as academic history. It is also scary. "

Other titles by David Suzuki