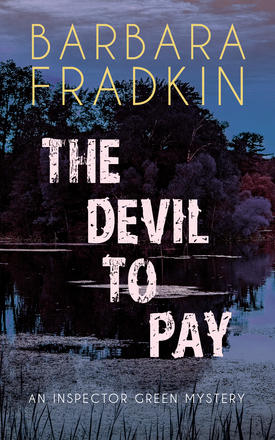 The Devil to Pay

The Devil to Pay

Impetuous, exasperating Ottawa Police Inspector Michael Green returns and unwittingly puts his daughter, a rookie patrol officer, in the line of fire.
“For those who like a solid classic mystery with added character, Inspector Green is perfect. ” —Globe and Mail

Impetuous, exasperating Ottawa Police Inspector Michael Green returns and unwittingly puts his daughter, a rookie patrol officer, in the line of fire.
“For those who like a solid classic mystery with added character, Inspector Green is perfect. ” —Globe and Mail

Sidelined to administrative duties, Inspector Michael Green misses the thrill of the chase. So when his daughter Hannah, now a rookie patrol officer, responds to a 911 call about a domestic disturbance in a wealthy suburban neighbourhood, he is intrigued. Both husband and wife deny a problem and, despite Hannah’s doubts, no further police action is taken, but Green encourages her to dig deeper on her own. When the husband disappears and his car is found at the airport, the police conclude he is simply fleeing an unhappy home, a floundering law practice, and a mountain of debt. Until a body is discovered.

While Green’s old friend Brian Sullivan investigates the victim’s work and family, Hannah is haunted by fear that her actions precipitated the murder. On her own time, she begins to dig into questions that linger at the periphery of the case. What has happened to the family dog, which disappeared the same night as the husband? And who is the odd, solitary young Ph. D. student who was researching ducks near the murder site? Her relentless search for answers leads her into the countryside, straight into the path of danger. And another body.

Barbara Fradkin is a retired psychologist who is fascinated with why people turn bad. She is the author of the critically acclaimed Amanda Doucette series and the award-winning Inspector Green novels. She lives in Ottawa.

For those who like a solid classic mystery with added character, Inspector Green is perfect.

In a modern crime fiction universe in which protagonists are expected to have weaknesses as well as strengths and to portray a full range of human characteristics, Barbara Fradkin’s Inspector Michael Green has always been among the most, well, human.

Fans of character-driven police procedurals will be satisfied.

A fast-paced crime thriller [featuring] a breathtaking plot with so many twists and turns.

Many fans will, no doubt, be delighted by the return of Inspector Green, now accompanied by his headstrong daughter Hannah, in a tale with a surprise ending.

Other titles by Barbara Fradkin