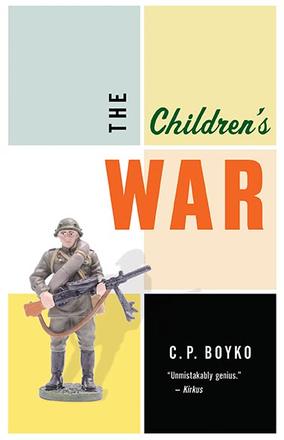 In his fourth collection, C. P. Boyko turnshis keen eye to the question of power—in schools and on campuses, in doctor’s offices and boardrooms, in triage tents and on the battlefield. A high-school math teacher tries too hard to be liked; childhood friends grow up and go ... Read more

In his fourth collection, C. P. Boyko turnshis keen eye to the question of power—in schools and on campuses, in doctor’s offices and boardrooms, in triage tents and on the battlefield. A high-school math teacher tries too hard to be liked; childhood friends grow up and go to war for very different reasons; for purposes not entirely medical, a dentist hypnotizes a patient; management and workers struggle for control of a faltering factory; infantries comprised exclusively of women meet in battle; and undergraduates occupy a university president’s offfice, rallying beneath the flag of moral outrage.

Moving effortlessly through a range of styles, from contemporary realist fiction and episodic adventures to three-act plays and polyvocal narratives, Boyko’s chameleon talents reveal the thread that binds his disparate characters and plots: the hunger to hold power and all the ways we are consumed by it. Clear-eyed but not cynical, satirical without being sarcastic, The Children’s War is as entertaining as it is insightful.

Praise for The Children's War

“For readers who like their collections big and bold. ..Dense but readable, these stories are well developed and sufficiently tilted in content to attract a range of serious readers. ” —Library Journal

“[T]he farcical, absurd, deft story 'The Takeover of Founders’ Hall' . . . [is] a searing vision of folly and a picture of the Ivory Tower that’s hilariously irreverent . . . Slamming together disparate genres, ['Andrew and Hillary'] impresses as a showcase of terrific writing and untrammelled invention. ” —Quill & Quire

“Nimble . . . Boyko gives new meaning to the term 'elastic prose' . . . These stories will haunt the minds of readers long after they finish the book. ” —Winnipeg Free Press

“C. P. Boyko proves the broad reach of his talents in The Children’s War, a collection of six stories that range from novella to play to traditional short-story. His characters here are often intelligent and emotional, resulting in explosive conflicts; whether the setting be an oppressive school, an ever-busy factory, or the frontlines of a war between the armies on an unnamed island and its interfering super-power neighbor . . . Though the choices these characters make are not always effective, it is clear that Boyko understands this truth: action is always human and, even in failure, is often beautiful. ” —Arkansas International

“These stories are funny and sardonic, satirical, well-written, and keen . . . [Boyko’s] characters are larger-than-life, very funny, but more authentic than they first seem . . . we’ll enjoy laughing at them, and laugh at ourselves at the same time. ” —San Francisco Book Review

"Few writers in this country have a better poker face than C. P. Boyko . . . vivid and wickedly funny. ” —The Globe and Mail

“Laughter is Boyko’s preferred method in Novelists: He examines the pomposity and naked insecurities of his titular breed through humour, much of it painfully ironic . . . a highly amusing riposte to the culture of literary awards. ” —National Post

Other titles by C.P. Boyko