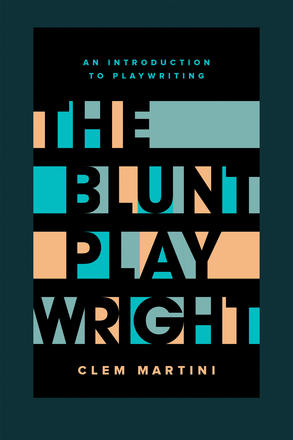 The Blunt Playwright won’t tell you everything there is to know about playwriting. It won’t even try. What it will do is examine process, structure, dialogue, and character; provide classic and contemporary scenes to study; outline clever exercises to strengthen writing skills; ... Read more

The Blunt Playwright won’t tell you everything there is to know about playwriting. It won’t even try. What it will do is examine process, structure, dialogue, and character; provide classic and contemporary scenes to study; outline clever exercises to strengthen writing skills; and so much more. Highly regarded and used in schools everywhere, this updated edition cements its place as one of the best resources for playwrights.

From organizing the structure of a script to developing characters’ voices, from employing visual effects on stage to writing comedy, or from self-promotion to getting produced and published, this guide has something for everyone, no matter the stage of their career.

Welcome to the second edition of the The Blunt Playwright.

I initially wrote this book over a decade ago when I realized how thoroughly colonized Canadian theatre remained, even after decades of notable, homegrown, work. In Canadian classrooms, libraries, and bookstores you could find any number of texts on the topic of playwriting, but not one that employed regular exemplars written by Canadians. It was as though Canadian playwrights and playwriting had never existed.

I embarked on a search, found—?of course—?that there was no shortage of terrific Canadian plays to draw from, and so set out to create a text that used examples from many countries, including Canada.

Since the book was first launched, however, many things have changed. The technology employed in the profession is probably the most noticeable aspect. It was, for example, standard at one time for a playwright to slip their brand new script into a brown envelope and mail it to a potential producing theatre. Now, although some theatres continue to require a hard copy, the majority request electronic submissions. At the same time, adaptations and improvisational approaches to playwriting have gained greater currency. This second edition attempts to reflect these changes.

As might be expected, new and exciting plays have been written since The Blunt Playwright first hit the bookshelves. I’ve included scenes from several recent works in this edition.

As well, I received feedback from readers that found the writing exercises included in the book enormously useful, and consequently have added a couple more to the roster.

Over a decade after having written The Blunt Playwright, I remain convinced that there is no livelier, more genuinely human form of writing than playwriting, and this book continues to offer the same message about the writing process that it did when it was first released. There are no easy routes to success; no secrets, no rules, no shortcuts. There continues to be only one way to find your way to the audience and that is to write your way there.

So enjoy the process, set your fears aside, and get busy.