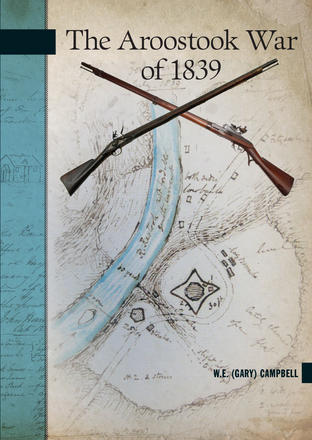 A little-known episode in North America's history, the 1839 Aroostook War was an undeclared war with no actual fighting. It had its roots in the 1793 Treaty of Paris, which ended the American Revolutionary War but left the border of Maine (then part of Massachusetts) and British ... Read more

A little-known episode in North America's history, the 1839 Aroostook War was an undeclared war with no actual fighting. It had its roots in the 1793 Treaty of Paris, which ended the American Revolutionary War but left the border of Maine (then part of Massachusetts) and British North America unsettled, and in the War of 1812, when parts of northern Maine were occupied by Britain. Fearing a negotiated border would negatively affect their claim for the disputed territory, Maine occupied the Aroostook River valley in early 1839, British regulars, New Brunswick militia, and Maine militia were then deployed in the dead of winter, as the kindling was laid for a third major Anglo-American conflagration. Eventually, cooler heads prevailed, although they did not deter a number of skirmishes between the Maine Land Agent posses and a loosely organized group of New Brunswick lumbermen.

A complex story of friction, greed, land grabs, and rivalry, this border dispute which nearly resulted in war was eventually settled by the Ashburton-Webster Treaty of 1842 and told by Campbell in The Aroostook War of 1839.

The Aroostook War of 1839 is volume 20 in the New Brunswick Military Heritage Series.

Major W.E. (Gary) Campbell has served for over forty years in the Canadian Army (Militia), the Canadian Army (Regular), and the Canadian Forces. He is a PhD candidate at the University of New Brunswick and has obtained a bachelor of arts (history) from the University of Western Ontario and a master of arts (War Studies) from the Royal Military College of Canada. His passion for military history, especially logistics, and his many tours of duty as a transportation officer in the Logistics Branch of the Canadian Armed Forces led to his interest in the Grand Communications Route. Gary Campbell is presently posted to the Combat Training Centre headquarters at CFB Gagetown, New Brunswick, after serving in a variety of line nad staff positions in navy, army, air force, and headquarters units across Canada as well as in the United States and the United Kingdom. He has twice received the Royal Logistics Corps Review Award. He is an active member of the Orders and Medals Research Society, the Military Collectors Club of Canada, and the York-Sunbury Historical Society, and he has served on the boards of the latter two groups.

"[T]his book is lively and easy to read but nonetheless is packed with exceptional detail that rewards close attention. " — Joel Ralph, canadashistory. ca

Other titles by W.E. (Gary) Campbell