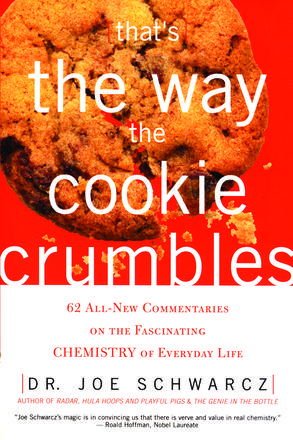 Dr. Joe Schwarcz breaks down the fascinating chemistry that’s all around us in this intriguing look at everyday science

Dr. Joe Schwarcz breaks down the fascinating chemistry that’s all around us in this intriguing look at everyday science

Interesting anecdotes and engaging tales make science fun, meaningful, and accessible. Separating sense from nonsense and fact from myth, these essays cover everything from the ups of helium to the downs of drain cleaners and provide answers to numerous mysteries, such as why bug juice is used to color ice cream and how spies used secret inks. Mercury in teeth, arsenic in water, lead in the environment, and aspartame in food are all discussed. The secret life of bagels is revealed, and airbags, beer, and soap yield their mysteries. This collection is full of surprising, educational, and entertaining commentaries that show how relevant science is to everyday life.

Dr. Joe Schwarcz is director of McGill University’s Office for Science and Society, dedicated to demystifying science and separating sense from nonsense. He is a popular lecturer, both to students and to the larger public. He hosts The Dr. Joe Show on Montreal radio and is the author of over a dozen bestselling titles. Dr. Joe lives in Montreal, Quebec.

I look forward to my Friday mornings. That’s when I spend an hour and a half conversing with the public on CJAD Radio in Montreal. The idea behind the show is for me to provide reliable scientific information, answer questions about current concerns, and attempt to clear up some of the mysteries that permeate daily life. But the show is an education for me, as well. For over twenty years, it has allowed me to monitor the pulse of the population and gain a glimpse into its psyche. I have been pleased by callers who have made unusual scientific observations, elated by those with intriguing questions, and frustrated by the occasional demonstration of scientific illiteracy. I have also come to realize that people are burdened with numerous fears, both rational and irrational. And I have learned not to be surprised. Shocked, maybe — but never surprised.

“How do you wash microwaves out of socks?” one caller queried. I didn’t quite know what to make of this. Quickly, though, we established that he was not worried about having trodden on some stray microwaves, but he had heard about a device being marketed to reduce the risks of cell phone use. First of all, we need to understand that there is very little scientific evidence to suggest that cell phones are dangerous, other than to those who use them while driving. But that has not stopped the inventive marketers. They’ve come up with a socklike device that one places over the phone to absorb the “harmful microwaves.” The instructions that come along with this gem apparently instruct the user to launder the sock regularly to “wash out the radiation.” Total nonsense.

Microwaves are a form of energy, and they can indeed be absorbed by materials. After all, that’s how microwave ovens work. Moisture absorbs the waves, energizing the water molecules. They move around more rapidly, and it is this motion that we sense as heat. But microwaves cannot be stored in a substance for later release. It seems, though, that this contention is not restricted to scam artists who want to protect us from cell phones. A listener once called to ask how long one should allow microwaved food to stand after cooking to “allow the microwaves to escape.” Obviously, this person had been reading her microwave cookbook, which would have advised her to allow microwaved food to stand briefly before serving it. This is common practice, necessary to complete the cooking process. Contrary to what many think, microwaves do not penetrate food deeply. The exterior of the food in question is easily heated, but the inside cooks through heat transfer by conduction. That’s why the food must stand for a few minutes. It has nothing to do with allowing vagrant microwaves to escape.

Microwaves are not the only form of radiation causing undue concern. A terribly agitated caller was worried because after being x-rayed she was asked to take the films to her physician herself. She had heard all about exposure to x-rays being dangerous and thought that by carrying the films she was “exposing” herself. Since the infamous date of 9/11, a number of people have asked about wearing clothes that have gone through x-ray scanners at airports. They are concerned that these items may become radioactive and pose a risk to their health. Excessive exposure to x-rays can certainly be risky, but x-rayed items do not store and reemit radiation. Unfortunately, just a mention of the word radiation is often enough to alarm people.

A gentleman wanted to know what the safest way was to dispose of a broken compact-disc player. I didn’t realize what he was getting at until he asked whether a laser was a form of radiation, which of course it is. Radiation is nothing more than the propagation of energy through space. Turn on a light and you are exposed to radiation. The caller knew that CD players use a laser, and since lasers produce radiation, there had to be some risk. The laser beam in a CD player is just a special type of light beam that poses no danger at all, and it is only emitted when the device is on. So old CD players can be safely discarded. But old laminated pictures may be a different story.

I had to address this issue when a caller asked if it was safe to burn a laminated picture in her fireplace. It turned out that she had been recently divorced and wanted no reminders of her former spouse. Burning his picture seemed appropriate, but she had heard that laminated photos were mounted on particleboard glued together with urea-formaldehyde resin. She was worried that the heat would release formaldehyde, which she had heard was toxic. Indeed, formaldehyde is a problematic substance, but the amount released in this particular combustion process would be too little to cause concern. Still, I suggested that if she was still worried, she could hang on to the picture until the next hazardous waste collection took place in her municipality. She liked that idea — she told me that “hazardous waste” was an excellent description of her former mate.

Then there was the listener who wanted to know if lighting a match was a good way to get rid of the smell of natural gas in a house. That question prompted me to launch into a lecture on a common misunderstanding about gas. Natural gas, I said, is just methane, and methane has no smell. That’s why odiferous compounds are added to make sure that gas leaks are readily detected. I explained that soot from a burning match could absorb small amounts of smelly compounds, but, I added somewhat smugly, it was not a good idea to go around striking matches in a house that could be filled with methane. It was then that the caller sheepishly informed me he knew all that, but the “natural gas” he was talking about was more likely to be found in the bathroom than in the kitchen. It was I, not he, who had jumped to the wrong conclusion. Like I said, my Friday mornings are interesting.

Other titles by Dr. Joe Schwarcz