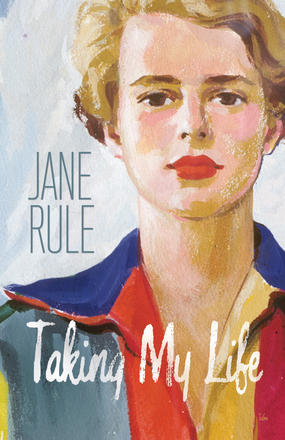 Discovered in her papers in 2008, Jane Rule’s autobiography is a rich and culturally significant document that follows the first twenty-one years of her life: the complexities of her relationships with family, friends and early lovers, and ... Read more

Discovered in her papers in 2008, Jane Rule’s autobiography is a rich and culturally significant document that follows the first twenty-one years of her life: the complexities of her relationships with family, friends and early lovers, and how her sensibilities were fashioned by mentors or impeded by the socio-cultural practices and educational ­politics of the day.

In writing about her ­formative years, she is indeed “taking” the measure of her life, assessing its contours of pleasure and pain, accounting for how it evolved as it did. Yet not ­allowing the manuscript to be published in her lifetime was an act of ­discretion: she was considering those who might have been affected by being represented in her work not as confidently ­emancipated as she had always been. She must also have appreciated the ambiguity of the title she chose, with all its implications of suicide: at the end of her writing life, she was submitting herself to critical scrutiny, ­allowing herself to be vulnerable as a person to the critique of her readers.

Deeply moving and elegantly witty, Taking My Life probes in emotional and intellectual terms the larger philosophical questions that were to preoccupy her throughout her literary career, and showcases the origins and contexts that gave shape to Rule’s rich intellectual life. It will especially ­appeal to avid followers of her work, delighted to discover another of her books that has, until now, remained unpublished.

Jane Rule was born in New Jersey in 1931 and came to Canada in 1956, where she later taught at the University of British ­Columbia. Her first novel, Desert of the Heart (1964), in which two women fall in love in 1950s Reno, Nevada, was successful as a 1985 feature film titled Desert Hearts.

Rule emerged as one of the most respected writers in Canada with her many novels, essays and collections of short stories, ­including Theme for Diverse Instruments (1975). She received the Canadian Authors Association best novel and best short story awards, the American Gay Academic Literature Award, the U.S. Fund for Human Dignity Award of Merit, the Canadian ­National Institute for the Blind’s Talking Book of the Year Award and an honorary doctorate of letters from the University of British Columbia.

In 1996, Jane Rule received the George Woodcock Lifetime Achievement Award for an Outstanding Literary Career in British Columbia. She passed away in 2007.

"With her signature wit, intellect, and insight, Jane Rule recounts her childhood, youth and coming of age as a young lesbian in 1950s America, as it was on its crest toward the civil rights, gay, and women’s movements. The seeds of Rule’s passion for writing and for social justice resonate in this thoughtful, textured, honest memoir. "
—Karen X. Tulchinsky

"This unexpected, astonishing opportunity to visit the early emotional and intellectual world and nascent sexuality of arguably the most significant lesbian writer of the twentieth century is a publishing event of the first order. Told from the perspective of her later years, Jane Rule’s recently discovered memoir affords the pleasure of newly visiting the richness of an exceptional mind, her humor, compassion, and candor. Filled with deeply personal revelations, Taking My Life conveys the confusion, poignancy, defiant rebellions and historical realities of Jane’s first footsteps toward womanhood, toward becoming a lesbian, toward her destiny as one of our great writers. "
—Katherine V. Forrest

“A hella interesting early lesbian writer with a unique style … Her writing is dry, ironic, unemotional, and direct, yet understated. It is not the kind that you whip through; rather, it’s a languishing over, doubling back to catch the dry humour kind of prose. … this memoir likely won’t intrigue you much unless you’re already a fan of Jane Rule or you have a special interest in 20th century herstory. If you fall into either of those camps though, you’re in for a treat. … as well, it sports an absolutely gorgeous cover featuring a painting of Rule by Ann Smith, who was a friend and lover of hers. … I’m glad this work is accessible to the larger public, and in this gorgeous edition to boot. ”
—Casey the Canadian Lesbrarian (blog)

"[A] delicious, wholly satisfying autobiography. I’m going to go out on a limb to say that, if you read no other book this year, read this one. There’s not a wasted word. "
—Lesbian News

"In taking the measure of her own life, Rule challenges readers to examine themselves, to look at her words through their own hearts, and to examine their own relationships with the same honesty and integrity that Rule herself embodied so well. In all aspects of the book, Rule’s incredible determination shines through, proving again and again that with nothing more than a solidly entrenched sense of morality and a little risk-taking, even those of us who might seem the most unlikely candidates can succeed beyond our wildest imaginings. "
—Xtra!

"Whether it serves as an introduction to a new ­literary voice or an illumination of an already beloved one, this book offers fascinating insight into Rule’s ­formative years as a provocateur, intellectual, lover, and writer. "
—Publishers Weekly

"[A] beautiful piece of dryly ironic writing, deeply thought out and intellectually honest, almost to the point of pain. Morra has edited this volume with loving, scholarly care. "
—George Fetherling, Quill & Quire

"In Taking My Life, Rule the realist has illuminated with insight, joyousness, tenderness and even pain the influences that were to shape her as a writer and as a sexual being. It’s an absorbing read. Her great openness about relationships, her insistence on the creation of community, her pursuit of truth – she “studied the great (male) liars in college in order to find out how to tell the truth” – is very much in evidence here. ‘If it’s real in the world,’ she has said elsewhere, ‘you’d better understand it. ’ Thanks to Linda M. Morra’s discovery, Taking My Lifecan only increase our understanding of the pragmatic and compassionate Jane Rule. "
—M. A.C. Farrant, Globe & Mail

Other titles by Jane Rule