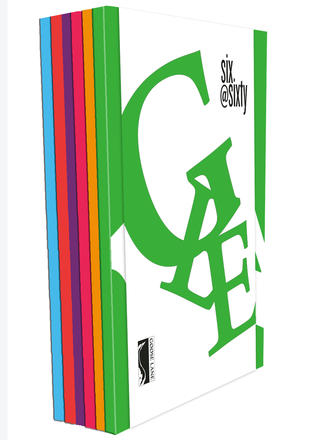 To mark Goose Lane Editions's 60th anniversary, the editors at Goose Lane selected six tiny perfect stories for your reading pleasure. Authored by some of Canada's finest writers, they come from the sweep of Goose Lane's publishing history. Each story is part of this collection ... Read more

To mark Goose Lane Editions's 60th anniversary, the editors at Goose Lane selected six tiny perfect stories for your reading pleasure. Authored by some of Canada's finest writers, they come from the sweep of Goose Lane's publishing history. Each story is part of this collection or they may be purchased individually in eBook singles. Here's what you can expect to find in this sexagenarian sextet:

ALDEN NOWLAN's "A Boy's Life of Napoleon," a brilliant piece of short fiction adapted from Nowlan's first novel, The Wanton Troopers, written in 1960, but published posthumously in 1988.

KATHRYN KUITENBROUWER's haunting "What Had Become of Us," from her 2003 debut book of short fiction, Way Up.

The extraordinary "Knife Party" from Knife Party at the Hotel Europa by MARK ANTHONY JARMAN, published in the spring of 2015.

Born in Hants Co., Nova Scotia, in 1933, Alden Nowlan moved to Hartland, New Brunswick, when he was nineteen, and worked on the Hartland Observer as reporter, editor, and general facilitator until he went to Saint John (and the Telegraph Journal) in 1963. In 1968 he was invited to take up the position of Writer-in-Residence at the University of New Brunswick in Fredericton. Alden Nowlan died on June 27th, 1983.

Douglas Glover: Douglas Glover (1948-) is the award-winning Canadian author of five story collections, four novels (including Elle), and two works of non-fiction. In 2003 he won the Governor-General's Award for Fiction; in 2005 he was shortlisted for the International IMPAC Dublin Literary Award; in 2006 he won the Writers' Trust of Canada Timothy Findley Award. His critically acclaimed novel The Life and Times of Captain N. was listed by the Chicago Tribune as one of the best books of 1993 and as a Globe & Mail top-ten paperback of 2001.He was recently the subject of a TV documentary in a series called The Writing Life and a collection of critical essays, The Art of Desire, The Fiction of Douglas Glover, edited by Bruce Stone. And he appeared in several segments of the TV series Writers' Confessions.Since he washed up in the hinterlands of upstate New York in the early 1990s, Glover has taught at Skidmore College, Colgate University, Davidson College, and the State University of New York at Albany. In addition, he has been writer-in-residence at the University of New Brunswick, the University of Lethbridge, St. Thomas University and Utah State University. He is currently on the faculty of the Vermont College of Fine Arts MFA in Writing program.

Other titles by Alden Nowlan

Other titles by Lynn Coady

Other titles by Kathryn Kuitenbrouwer

Other titles by Mark Anthony Jarman