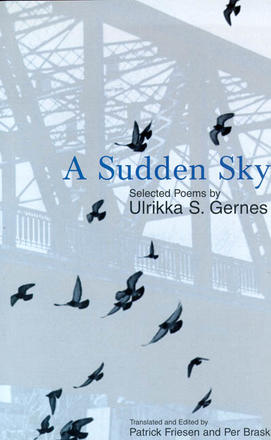 By Ulrikka S. Gernes
Translated by Patrick Friesen & Per Brask

A Sudden Sky is a book of northern poems with crystalline images and lines, fragile graceful poems that speak of fragments, of the moment between open and closed eyes, of the human need for embrace. These poems note the spaces between things - always a gap, a failed connection, ... Read more

A Sudden Sky is a book of northern poems with crystalline images and lines, fragile graceful poems that speak of fragments, of the moment between open and closed eyes, of the human need for embrace. These poems note the spaces between things - always a gap, a failed connection, like radio waves caught in the sky.

I REFUSE to accept
the spine's dictated script
which at the precise moment
lets itself dissolve, lets itself be inserted
as a footnote of terror in the great law
that has condemned us to carry
the quake's loosening when the alibi doesn't hold
and the body surrenders itself
when dawn cleans up
among the stars

Gernes has called poetry "a resistance movement", explaining "A poem gives us the possibility of hearing our own voices. While the media offer us the world in small pieces, which are experienced as chaos, poetry seeks connections".

Ulrikka S. Gernesis the author of eleven collections of poetry and two books for children, as well as many short stories, songs, and various contributions to literary anthologies, art catalogues, magazines and newspapers. Her work has been highly acclaimed in Denmark since the publication of her first collection Natsvaermer (Moth) in 1984 when she was 18. In 2001 A Sudden Sky: Selected Poems, translated into English by Per Brask and Patrick Friesen, was published by Brick Books.

Patrick Friesen writes poetry, essays, drama, scripts, songs, and text for dance and music. The author of over a dozen books of poetry, Friesen has collaborated with various musicians, including Big Dave McLean, Cate Friesen, and Marilyn Lerner, and with choreographer-dancers Margie Gillis, Stephanie Ballard, and Ruth Cansfield. Friesen also teaches, part-time, as a sessional in the Writing Department at the University of Victoria. His most recent poetry book is jumping in the asylum (Quattro Books, 2011). Formerly of Winnipeg, Friesen now lives in Brentwood Bay on Vancouver Island.

Other titles by Ulrikka S. Gernes

Other titles by Per Brask