Following tragic events, from which Julie O’Dale believes she and her husband, Ian, will never recover, Julie buys into Ian’s dream to give up their comfortable city lives and retreat to the Chilcotin area of British Columbia. Along with a team of draft horses, four cow ... Read more

Following tragic events, from which Julie O’Dale believes she and her husband, Ian, will never recover, Julie buys into Ian’s dream to give up their comfortable city lives and retreat to the Chilcotin area of British Columbia. Along with a team of draft horses, four cow ponies, and the range cattle, which are included in the purchase of the remote six-hundred-acre ranch, they reluctantly inherit the reclusive tenant who lives in an old trapper’s cabin on the property. As both Julie and Ian wrestle with their deteriorating marriage, and the individual guilt and sorrow that drove them to try to run away from reality, they have to contend with the wilderness at their doorstep—and the mysterious tenant, Virgil Blue. Against his will and theirs, he slowly becomes drawn into their lives and has an impact in ways that none of them could have foreseen.

Donna Milner is the author of four novels, including Somewhere In-Between, A Place Called Sorry, the internationally acclaimed After River, which was published in twelve countries and translated into eight languages, and The Promise of Rain, which was a Globe and Mail top 100 pick for 2010.

Born Donna Jonas in Victoria, British Columbia, Donna spent her childhood in Vancouver. As an adult she relocated to the town of Rossland in the heart of BC’s West Kootenay, and ten years later moved to the central interior city of Williams Lake. She now lives in an off-the-grid, eco-friendly lakeside home in the Cariboo woods with her husband, Tom, and their dog, Beau.

Part elegy, part ode to nature, and an anthem of love across worlds, Donna Milner’s Somewhere In-Between is a lyrically written story of the power of universal family, of tragedy, forgiveness, and hope. 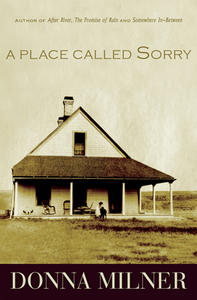 Other titles by Donna Milner