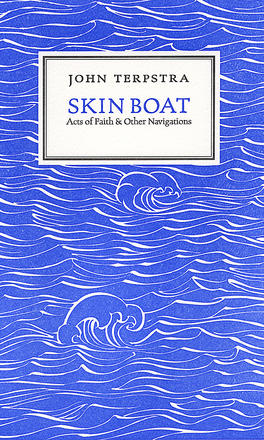 Skin Boat is John Terpstra’s frank reflection on faith and church in a ... Read more

Skin Boat is John Terpstra’s frank reflection on faith and church in a secular era. In the contemplative but direct prose style of his previous works of prose, Terpstra draws on his daily interactions with friends, neighbours and fellow congregation members, his work as a carpenter and cabinetmaker, and the stories of St. Brendan and St. Cuthbert. Turning over words like worship, praise and maker?mainstays of the Christian lexicon?Terpstra prods at vocabulary too often glossed over by believers and nonbelievers alike, approaching faith as equally an intellectual as instinctual and physical act.

“As this book began to grow,” says Terpstra, “I knew that I wanted to work the story lines of two medieval saints into it. The one, Cuthbert, had been rattling around in my brain for twenty years or so. It wasn’t his life or achievement that interested me most, but his uncorrupted body. He was exhumed a decade after burial, but his flesh had not decayed and he appeared to be only sleeping. He slept on, and became a spiritual tourist attraction for centuries afterward. Brendan, my second saint, was famous for a sea voyage. He may have been the first European to set foot on North America?in the sixth century. I had read an account of a modern re-enactment of his fabled journey: a gripping high-adventure, a kind of North Atlantic Kon-Tiki. What I found when I turned to the original medieval account of the journey was mesmerizing, mysterious, contradictory, open-ended and, well, as strange as Cuthbert’s uncorrupted body. I thought I would hook my sail to their boats and see where they took me. ”

Over the course of the book, Terpstra considers the religious tradition in which he was brought up, his and his wife’s decision to leave that tradition, the evolution of their adoptive church community, and occasional visits to other denominations. Conversations with members of his congregation, friends and co-workers illuminate and complicate any provisional conclusions reached en route. Ultimately, it is this degree of honesty and perplexity, too often missing from contemporary examinations of faith, that set Skin Boat apart as a thoughtful inquiry into its persistence.

John Terpstra is the author of eight books of poetry, including Disarmament, which was short-listed for the Governor General's Award, and Two or Three Guitars: Selected Poems. An earlier work, Captain Kintail, won the CBC Radio Literary Prize for Poetry. He has also written three books of creative non-fiction. The Boys, or Waiting for the Electrician's Daughter was short-listed for both the Charles Taylor Prize and the BC Award for Canadian Non-Fiction. He lives in Hamilton.