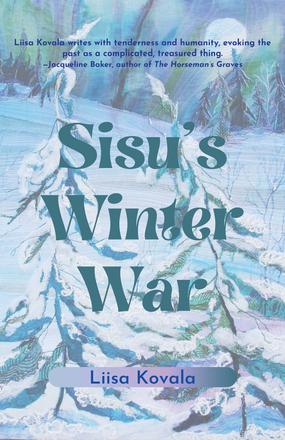 Promises made over fifty years earlier have their reckoning.

Meri Saari made a promise to her dying mother she would keep the family together, but she was too young to know how a war can pull people apart. As a teenager responsible for her siblings she finds herself following ... Read more

Promises made over fifty years earlier have their reckoning.

Meri Saari made a promise to her dying mother she would keep the family together, but she was too young to know how a war can pull people apart. As a teenager responsible for her siblings she finds herself following her father to the front lines during the Winter War when he goes missing in action. Forty years later, living in northern Ontario, Meri's past and present collide when she is diagnosed with early onset Alzheimer's. Responsible for her granddaughter, and navigating a strained relationship with her daughter Linnea, Meri is haunted by the people of her past and by the promises she failed to keep. As she struggles against her inevitable decline, she knows her losses are amassing: her home, her health, and her memories. Meri embarks on one last journey in search of the man she had to give up, and before it's too late. Before everything disappears.

Liisa Kovala is a Finnish Canadian author and teacher. Her first book, Surviving Stutthof: My Father's Memories Behind the Death Gate (Latitude 46, 2017), was shortlisted for a Northern Lit Award and published in Finland under the title Stutthofin selviytyjä (Docendo, 2020). Her work is inspired by her Finnish heritage and the northern landscape she calls home. Sisu's Winter War is her debut novel. She lives in Sudbury, Ontario with her husband and two children.

The longest night of the year seemed endless as I watched my mother's face twist in pain, sweat dripping down her temples as she paced back and forth across her bedroom floor in her linen nightgown. An acrid smell drifted in the air as I struggled to light the lone lantern by her bedside. Long shadows on the walls dancedeerily to the shriek of the wind and the groans escaping my mother as she doubled over, gripping her overripe belly. The winter storm pelted flakes against the window, but the heat of the wood stovefrom the next room, serving as both our small kitchen and living room, kept the cold at bay. For the hundredth time, my eyes drifted to the clicking mantel clock; I hoped my father would get home in time through the storm.

"Get some fresh linens," Akka said to me, as she guided my mother around the room, a firm hand on her lower back making tight circles. "And take your little sister with you. "

"Don't be afraid, Meri," my mother said. I nodded my head and tried to smile, hoping I looked brave for my mother. She had been in labour for hours, but these sudden, more urgent pains took me by surprise.

"Come on, Eveliina. " I reached for my sister's hand. She stood spellbound with her back against the wall, watching the proceedings. In one hand she gripped the little bird Father had carved for her last summer. She took my hand and I guided her out of our mother's bedroom.

I had never seen a baby being born before, but I knew my mother was in the midwife's capable hands. Old Akka lived in the same block of rowhouses on our quiet street, within walking distance to the city's centre to the north and the Baltic Sea to the south. She'd been friendly with my mother since my parents had married and moved into town, away from their quieter life in the countryside, a few years before I was born. Although I'd been curious, Akka wouldn't even let me in the bedroom when my sister Eveliina came into the world, even though I had waitedimpatiently outside my mother's door with my father, begging to be let in. "This is no place for children," he'd said. "Give your mother some space. "

Akka had helped many babies be born in our neighbourhood over the years and, my mother had reminded me, I had been one of them. Had my birth been like this one, so long and slow and painful? When a baby brother was stillborn a few years after Eveliina, I'd caught only a glimpse of his yellowish skin before he'd been whisked away. I'd been frightened of the little creatureshe'd held and saddened to know I might have had a brother to play with. Worse still was the baby who had lived for only ten days. His skin had been so pale and his limbs so scrawny, I didn't even want to look at him. When he finally took his last struggled breath, she had said, "Come and kiss your brother goodbye," but I'd refused. Only Eveliina was brave enough to kiss his foreheadand whisper a few last words about meeting him again someday. Even now, the shame burned in my cheeks at the memory.

Sisu's Winter War is a rich and sensitive story of love and connection in times of war and separation.

Marion Agnew, author of Reverberations: A Daughter's Meditations on Alzheimer's

With the universal themes of love, family, and sacrifice, and the sustained courage and resilience (sisu) that Meri displays in the wake of secrets, betrayal, danger, and loss, Sisu's Winter War is a very compelling and satisfying read.

Other titles by Liisa Kovala