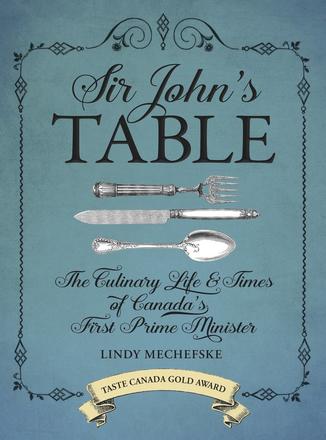 Sir John's Table traverses the colourful life of Macdonald, from his passage as a young Scottish boy in the steerage compartment aboard the Earl of Buckinghamshire to his new home in Kingston, Upper Canada. It traces his boyhood years of stealing fish and scarfing down fairy cakes into his adult life as a lawyer, husband, father, and eventual leader of the newly founded dominion of Canada. It was a journey that began with hardtack and suspicious-looking, watered-down stew amidst appallingly unsanitary conditions and culminated in grand dinners held in Macdonald's honour.

In a breezy and engaging style, author Lindy Mechefske traces Macdonald's life through some of the common foods of the day, from mutton, quince, and gooseberries to hare, cow heel, and ox cheek. Along the way, she reveals how to concoct the fried oysters served at the Charlottetown Conference and how a roast duck dinner saved the dominion.

Lindy Mechefske is a freelance writer and food columnist. She is the author of the cookbook A Taste of Wintergreen and blogs about her adventures in the kitchen at lindymechefske.com. She spent her early years in England and has lived in the US and Australia but calls beautiful, historic Kingston, Ontario, her home. Lindy's love affairs with food and history began when she was three years old, rolling out the pastry for jam tarts in her grandfather's ancient Yorkshire kitchen.

"Readers will be nourished with much first-rate fare. "

"Mechefske's book is an often tongue-in-cheek romp through the life of Sir John A. , and the food he consumed, from his voyage, at age five, on an immigrant ship to Canada (mouldy bread and watery horsemeat stew) to fancy state dinners during his long political career (champagne and oysters were essential). "

"This book is eminently readable — would that all history were written like this! — and interesting, offering both the clearest example of 19th-century Canadian politics and very human insights into a very human architect of our country . .. Mechefske deftly weaves in Macdonald's culinary history, from the simplest of Scottish fare early in Macdonald's life to more exotic and glamorous meals later on. "

"A fresh, fun, and novel approach. Mechefske charts Macdonald's diet from his birth to his death, including typical Scottish gruel, meager rations on his ocean crossing, French Canadian cuisine, alcoholic beverages of all sorts, and diplomatic dinner parties. It's like a roadmap marked with various gastronomic stops. "