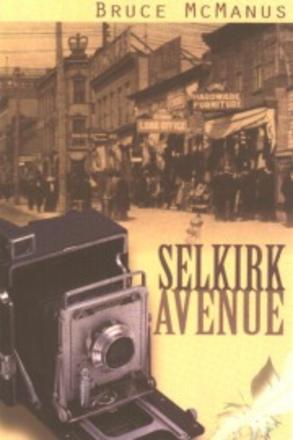 When it was shortlisted for the 1998 Governor General's Award for Drama, the jury said of Selkirk Avenue: "Quintessentially Canadian in its content, the play's appeal resides in McManus's skill in drawing us into the particular and varied lives of inhabitants of Winnipeg's North ... Read more

When it was shortlisted for the 1998 Governor General's Award for Drama, the jury said of Selkirk Avenue: "Quintessentially Canadian in its content, the play's appeal resides in McManus's skill in drawing us into the particular and varied lives of inhabitants of Winnipeg's North End over 75 years, and in doing so, speaking to all of us. "

Bruce McManus plays include, The Chinese Man Said Goodbye, Ordinary Days, Schedules, Calenture, and Selkirk Avenue (nominated for a Governor s General s Award for Drama in 1998). Adaptations for the stage include Three Sisters and A Doll s House produced at Prairie Theatre Exchange in 1998 and A Christmas Carol produced at MTC in 2005.

Harold:This street has its own life. Mary goes, I go. It doesn't depend on any one person, just people. The river flows, no matter what happens. Sometimes I think this street ran on anger and sometimes I think it ran on hope. Sometimes I think anger and hope are the same thing. I'm going to live with the old folks now. I mean old folks from here. Those old people, they always got a bottle, even the Christians, and they got stories about Selkirk Avenue. Believe me, the stories they tell, they got it all wrong. They need me there. Gesturing to the photos. All these photos, they're yours. For you, this is history. For me, it is memories and I can't find anything anyway. Throw it all away if you want, just don't complain to me if you don't know anything. I'll tell you one thing. Selkirk Avenue starts somewhere in Japan, cuts down through China and the Philippines, back up through India and the Soviet Union, Ukraine, Poland, Czechoslovakia, Yugoslavia, right across Europe, through Britain, up to God's Lake and the North and ends up at McPhillips Avenue. I worked here, I loved Mary here, and I'm going to die here. What else do you want in a street?

“McManus has crafted a story whose broad reach is matched by its sure grasp. The history of Selkirk Avenue as a haven-cum-springboard for successive minorities is told in a complex but comprehensible and emotionally irresistible tale that winds back and forth through the 30s, 50s, and the present. ”—The Winnipeg Free Press

Other titles by Bruce McManus