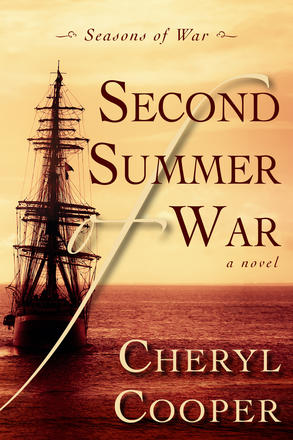 A dramatic, heart-warming a tale of life on the sea.

Set in 1813, Second Summer of War is a sequel to Come Looking for Me.
With the British traitor Captain Thomas Trevelyan incarcerated on a prison hulk in Portsmouth Harbour, Princess Emeline "Emily" Louisa sails back to England ... Read more

A dramatic, heart-warming a tale of life on the sea.

Set in 1813, Second Summer of War is a sequel to Come Looking for Me.
With the British traitor Captain Thomas Trevelyan incarcerated on a prison hulk in Portsmouth Harbour, Princess Emeline "Emily" Louisa sails back to England and is summarily dispatched to Hartwood Hall, home of the disagreeable Duke and Duchess of Belmont. There she endures weeks awaiting Trevelyan’s trial, unable to leave the estate or find useful occupation. Relations with her guardians, chilly at best, soon escalate into a battle of wills when they attempt to marry her off in order to secure favour with her uncle, the Prince Regent. Meanwhile, England’s naval war with the United States continues to rage on the Atlantic.
When Fly Austen and his friend, Dr. Leander Braden, are given Admiralty Orders to testify at the trial, they return home with the hope of seeing Emily one last time. Their journey is anything but uneventful as they encounter devastating storms, menacing ships, and a spectre that proclaims their impending doom.

Cheryl Cooper has a degree in English and Education from Queen's University. A former teacher of hearing-impaired children and a volunteer for the Children's Foundation of Muskoka, she lives in Bracebridge, Ontario, with her husband and two sons.

As with Cheryl Cooper's first book, Come Looking for Me, I couldn't put down her sequel, Second Summer of War. The continuing adventures and intrigues of her captivating characters kept me turning those pages, always wondering what was going to happen next. Rich with attention and historical detail, I could hear the unearthly sounds of the sea and feel the decks rocking beneath my feet. Another whirlwind of a read!

Teens who aren’t daunted by longer novels and those who like to get lost in the past will enjoy the adventure, romance, intrigue and excitement of this richly detailed story about events in Britain and at sea during the War of 1812, when the Age of Sail was at its zenith.

Like its predecessor, Come Looking For Me, this story draws you in from the opening pages. We feel like we’ve only left Emily and her companions for a brief moment. The transition is seamless. Cheryl Cooper’s extensive research really shines through in the definition she gives each of her characters and the world they inhabit…[Cooper’s] attention to detail and her mastery of her craft painted vivid living images of each character, their struggles, passions and sorrows.

Second Summer of War is the riveting sequel to Cooper's first novel, Come Looking for Me, and the second book in the Seasons of War series. Cooper does a masterful job of weaving the details of the first novel into the second. ..it is meticulously researched and extremely well written. The superbly developed characters draw the reader in to such a degree that while they may be loathe to put it down, they also don't want the book to end.

". ..strong supporting characters will keep you rooting for the sailors as they battle extreme conditions on the sea. ..[and] the naval backdrop makes all the difference. The comprehensive descriptions of the ships, guns, sailors, and medicine of the time make you feel like you are standing on a frigate with the characters. "

Other titles by Cheryl Cooper