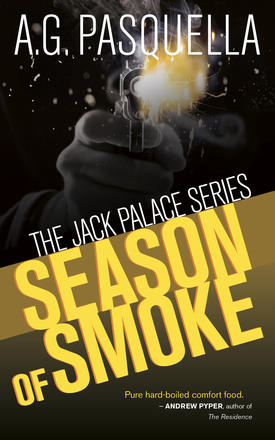 It looks like ex-con Jack Palace’s troubles will never end when he is pressured by the mob to kill one of his best friends.

Jack Palace is trying to go legit with his own security company — but his old life keeps trying to pull him back in. A mobster named Sammy DiAngelo ... Read more

It looks like ex-con Jack Palace’s troubles will never end when he is pressured by the mob to kill one of his best friends.

Jack Palace is trying to go legit with his own security company — but his old life keeps trying to pull him back in. A mobster named Sammy DiAngelo wants revenge for a killing that happened in Jack’s past. DiAngelo blames Jack’s friend Grover for the murder and gives Jack an ultimatum: kill Grover or be killed himself. Meanwhile, Grover has plans of his own. He wants to rip off the mob, and he needs Jack’s help to do it.

Jack is desperate to start a new life with Suzanne, a woman from his past … but is he desperate enough to kill?

Chapter 1I like to say I’m not a killer because it helps me sleep at night. I’ve killed people, sure, but I’m no killer. Does that even make sense? I only kill in self-defence, or so I tell myself. I wanted to put that part of my life far behind me. I wanted to sit out on my porch in the country and whittle sticks while the sun went down and crickets kicked up a racket in the grass. Sometimes, though, life has other plans.

I was living about half an hour outside of Orangeville, Ontario, in a sway-backed trailer that had once belonged to my good friend The Chief. The Chief had vanished ten years ago. I liked to think he was drinking daiquiris on the beach under an assumed name and maybe a brandnew mustache, but deep down I knew that wasn’t the case. The Chief was dead and gone for more than a decade now. I’d inherited his trailer, his barn, and his land, complete with tripwires and buried mason jars filled with rolled-up cash. I had been working all fall to clear the tripwires. It was slow going, poking around in the woods, jabbing at piles of leaves with a walking stick, bending down to snip rusty barbed wire with a pair of industrial strength clippers. I didn’t want anyone getting hurt.

The recruits were waiting for me in the barn. I walked past a few trees that hadn’t yet shaken off their leaves and tossed one of The Chief’s traps onto the garbage heap. My boots crunched on the gravel driveway as I headed for the barn.

The sign above the barn door said PALACE SECURITY in huge red letters. The sign gave me the warm fuzzies every time I saw it. Is it possible to change your life? Hell, yes. I, Jack Palace, was living proof.

Marcus, my first recruit, was standing just inside the barn. He and I had been working a job back in the city, but the pay wasn’t great. We stood around in front of a jewellery store, and now and then when a shipment came in we stood at the back while guys climbed out of Town Cars with jewellery cases handcuffed to their wrists. No one had tried to rob us since we had started working there. Avi, the owner, was thrilled with our track record and kept making noise about a performance bonus, but so far that bonus was just a distant dream.

We needed more clients and we needed more recruits. I had put some feelers out, but all my connections were still back in the city, so I’d put an ad in the paper. Half my day’s pay went to fuelling up the truck to get to and from the city. It would be nice to get some local clients and not have to make that drive every day.

Marcus shot me a smile as I walked in. “It’s a good-looking group, Jack. ”

I nodded. There were two men and a woman lined up near the heavy bag dangling from the ceiling. This was where The Chief had trained me so many years ago. Right there by that bag was where I finally got the drop on him, or so I’d thought. He twisted easily out of my grasp and then broke my arm. A white lightning bolt of pain shot through my body, and that was the end of training for that day.

I smiled at the recruits. I wasn’t planning on breaking any arms. I could almost hear The Chief snorting. “You baby ’em, Jack, and you’re going to end up with a bunch of babies. You think anyone is going to hire a bunch of babies?”

“Hello,” I said to the recruits. “Thanks for coming. I’m not going to lie to you, this job can be very demanding. We are going to train and we are going to train hard. Some of you might not make it to the end and that’s okay. Maybe some of you have worked security jobs before. We’re going to do things a little differently around here. Make no mistake: after I’m done training you, you will have the skills to survive. What’s the number one most important part of training?”

The woman raised her hand high. I gave her a nod. “Safety,” she said. I nodded again. “That’s right. We’re going to work hard, but we’re going to look out for each other. No one’s getting hurt on my watch. You got that?”

All the recruits mumbled.

It’s hard to change. It’s even harder to leave your past behind. What gets you through? Street smarts. Friends. A powerful right hook. And love. In this story, quick and sharp as a knife, we’re plunged into a cutthroat world of betrayal, loyalty, addiction and hope. Jack Palace is tougher than us, has seen more nasty things—heck he’s caused them—but in the end he wants the same things we all want, a good life and a chance at happiness. And in this gripping story, he tries to get them while dodging those who really, really don’t want him to succeed. Season of Smoke is as compelling as a mobster and as good company as a best friend. With as many surprises as life itself, it’s a thriller with real heart.

Pasquella vividly captures the dog-eat-dog existence of the Toronto underworld.

Pasquella easily captures the seamy side of Toronto and gives readers an array of memorable bad guys. Devotees of gritty crime fiction will eagerly await Jack's next outing.

[Season of Smoke] has it all for thriller readers.

Getting impatient with hard-boiled conventions? Try this.

Pure hard-boiled comfort food: dangerous characters and tight spots always putting the squeeze on a tough guy we can root for. Jack Palace is fun to spend time with — especially if you like your fun a little bloody and bruised.

Rich in atmosphere, with plausible characters . .. All in all, Season of Smoke is an entertaining read.