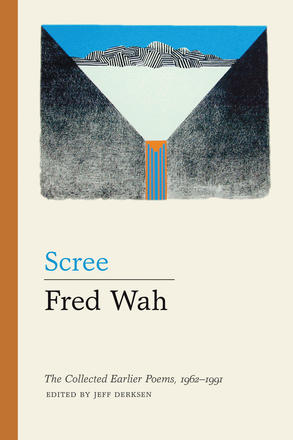 Fred Wah’s career has spanned six decades and a range of formal styles and preoccupations. Scree collects Wah’s concrete and sound poetry of the 1960s, his landscape-centric work of the 1970s, and his ethnicity-oriented poems of the 1980s. Fred was a founding member of the ... Read more

Fred Wah’s career has spanned six decades and a range of formal styles and preoccupations. Scree collects Wah’s concrete and sound poetry of the 1960s, his landscape-centric work of the 1970s, and his ethnicity-oriented poems of the 1980s. Fred was a founding member of the avant-garde TISH group, which helped turn Canadian poetry, in the West in particular, to a focus on language. He has said that his “writing has been sustained, primarily, by two interests: racial hybridity and the local. ”

The collection has been organized according to a chronology of composition (rather than a chronology of original publication): this reveals new connections and thematic trajectories in the body of work as a whole, and makes the book an eminently “teachable” volume. The book includes full-colour facsimiles of two early books, Earth and Tree, reproduced to show the "hands-on" object-based aspect of chapbook publishing.

Fred Wah
Fred Wah was one of the founding editors of the poetry newsletter TISH. Of his seventeen books of poetry, is a door received the BC Book Prize, Waiting For Saskatchewan received the Governor-General’s Award and So Far was awarded the Stephanson Award for Poetry. Diamond Grill, a biofiction about hybridity and growing up in a small-town Chinese-Canadian café won the Howard O’Hagan Award for Short Fiction, and his collection of critical writing, Faking It: Poetics and Hybridity, received the Gabrielle Roy Prize.

Jeff Derksen
Jeff Derksen’s poetry and critical writing on art, urbanism and text have been published in Europe and North America. He collaborates on visual art and research projects (focusing on urban issues) with the research collective Urban Subjects. Derksen’s Down Time won the 1991 Dorothy Livesay Poetry Award at the BC Book Prizes.

“The book is gorgeous, … attempting to keep as close as possible the integrity of the original publications into a single volume. The resulting volume – shift of image, colour and font – is a breathtaking accomplishment that does far more than simply replicate a selection of thirty years of writing and publishing, but work[s] to present some sense of what those early publications might have felt like in their original forms …”
—rob mclennan’s blog

“Scree, a handsome and expansive collection containing almost thirty years of Wah’s poetry, is both an introduction to and overview of the writer’s powerful but understated literary oeuvre. … As his body of work expands over time, so does its breadth and insight, even as the author breaks, disrupts and refines poetic form. Like the mountain that is a recurring image throughout Wah’s work, the vistas of Scree are both subtle and breathtaking…”
—Malahat Review

"This is surely the best poetry book of the year! Such care and thoroughness have been taken here to let each important early publication keep its style and colour and format. This is a heavy book full of some of the lightest, halest experimental poetry in Canada. It is so important that this work is being done, both the writing and the editing. "
– Phil Hall, BookThug

"This is surely the best poetry book of the year! It is so important that this work is being done, both the writing and the editing. " – Phil Hall, BookThug