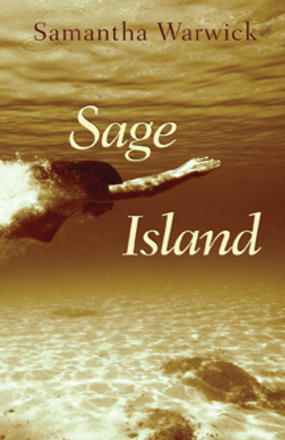 It's the mid-1920s and New York is shimmering with the hope and vigour of a younger generation in headlong pursuit of greater freedoms and pleasures. Watching from the sidelines, nineteen-year-old Savanna Mason struggles with the gravity of her perceived failures, finding release ... Read more

It's the mid-1920s and New York is shimmering with the hope and vigour of a younger generation in headlong pursuit of greater freedoms and pleasures. Watching from the sidelines, nineteen-year-old Savanna Mason struggles with the gravity of her perceived failures, finding release and security in the water. Savi believes that her swimming has the power to change her world. Just as it seems this notion has been shattered for good, she embarks on a journey to the Wrigley Ocean Marathon-a twenty-two-mile race from Catalina Island to Los Angeles. Inspired by true events, with vivid glimpses of Prohibition, class antagonism and the evolving attitudes of the flapper era, Sage Island is a poignant novel about a young woman diving and surfacing.

Samantha Warwick was born in Montreal and raised in Sutton, Quebec and Vancouver. She received her MFA in creative writing from the University of British Columbia in 2003. Her work has been broadcast on CBC Radio and has appeared in various literary magazines including Geist, Event, Room and Echolocation. Samantha spent seven years coaching competitive swimming between 1997 and 2004, and has participated in long distance open-water swim races in British Columbia, California and New York. She now lives and works in Calgary where she is at work on her second novel. Please visit samanthawarwick.com.

. . . an engaging blend of the historical contrasts of Prohibition and the flapper era with the always contemporary theme of personal achievement. Readers who take the plunge into this world of competition and coming-of-age will be rewarded. —Prairie Books NOW

Like a first-time national qualifier who astonishingly strikes gold, Warwick's literary skills have launched her shoulder-to-shoulder with veteran novelists while delivering a golden piece of history . . . I believe Sage Island will soar, whether the reader can dog-paddle or not. —SwimNews Magazine

Think Marilyn Bell with bob, kohl-lined eyes, bee-stung lips and attitude to spare . . . Savi, on the verge of becoming one of life's long-distance losers and obsessed with acing the chewing-gum-sponsored 22-mile open-water swim, hits the waves while Warwick hits fever-pitch prose rhythms effortlessly, gliding into near-poetry that alchemically takes readers along for the marathon stretch . . . [Sage Island] will leave readers both satisfied and wanting more, as all fine first novels ought to do . . . It's a thoughtfully engrossing charmer worth the price of admission. —The Globe and Mail

Seamless use of historical detail and sensory language immerse the reader. —FFWD

There is an authenticity in the writing, a defining sense of experiential reality that grounds the story and yet carries with it a growing momentum. —Edmonton Journal

I devoured [the book] in a few days . . . While some of the challenges [Savanna] faced were unfamiliar to me, her steely determination and blatant dismissal of the cynics in her life is something I not only identify with, but strive for. —Mallory Mead, US Open Water Marathon Swimmer

[Sage Island offers] genuine characters . . . Warwick’s poetical use of words engulfs [the reader] . . . from the beginning to the end of the novel. —Canadian Literature: A Quarterly of Criticism and Review

Keep your eye on those small Canadian presses. They may lack the marketing budget of big leaguers like HarperCollins and Random House but each year they publish some of the best emerging writers anywhere. A case in point is Samantha Warwick and her debut novel Sage Island, released in September by Victoria’s Brindle & Glass. Set against the exciting backdrop of 1920s New York, Sage Island chronicles the coming of age of its young heroine Savanna Mason as she deals with relationships and personal flaws while seeking fame as one of the best competitive swimmers of her generation. —Endtype

Warwick creates a compelling read—one full of unexpected twists and fascinating characters who come to play a significant part in Savi Mason’s reclamation. But apart from the engrossing characters and spot-on recreation of the first era of opulence in American sports, Warwick brings to fiction a striking and terribly engaging meditation on the authentic meaning of victory. The pace is brisk, the plot commanding, the characters vivid and sympathetic, the philosophy never intrusive. —Cindy Sherman for Aethlon: Journal of Sport Literature

Sage Island was shortlisted for the 2009 Georges Bugnet Award for Fiction.

Sage Island is the story of an underdog overcoming adversity and winning, but the win is not the one we expect. Instead, we learn to redefine the very concept of victory—and the new definition is one that will appeal to 'dreamers and desperados' of every era. ?—Angie Abdou for The Fernie Fix