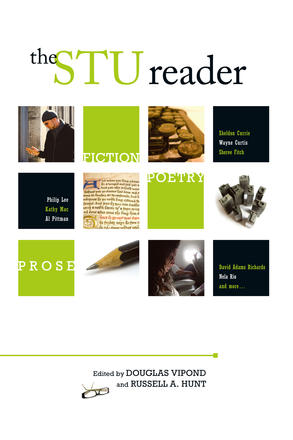 St. Thomas University has nurtured exemplary people for a century — from its first alighting in Newcastle to its current perch on a Fredericton hilltop. Here, in celebration of St. Thomas's 100th anniversary, is the first-ever collection of fiction, poetry, and prose by the ... Read more

St. Thomas University has nurtured exemplary people for a century — from its first alighting in Newcastle to its current perch on a Fredericton hilltop. Here, in celebration of St. Thomas's 100th anniversary, is the first-ever collection of fiction, poetry, and prose by the university's most celebrated writers, including David Adams Richards, Sheldon Currie, Leo Ferrari, Sheree Fitch, and Kathy Mac.

Philip Lee's thrumming account of a public auction kicks off the collection. Next up: Sheree Fitch's poem, "Cop," which wends through undercover prostitution and a child's abduction. Hard on its heels: Sheldon Currie's pitch-perfect story from a Nova Scotia coal-mining town. Once you begin, you're sure to read until the entire, delectable volume is consumed.

Douglas Vipond joined the psychology department in 1977. He taught in the writing program and has published a number of articles and reviews on reading and writing, many of them with Russ Hunt. He co-edited special issues of Poetics and Textual Studies in Canada and has written two books: Writing and Psychology (Praeger, 1993) and Success in Psychology: Writing and Research for Canadian Students (Harcourt, 1996).

Russell A. Hunt joined the English department in 1968. He co-authored K.C. Irving: The Art of the Industrialist (M&S, 1973) and has published journalism and scholarship in a wide range of journals and collections. He was a founder of the alternative journal the Mysterious East and of the Canadian Association for the Study of Language and Learning. On campus, he participated in the creation of the writing program, the Learning and Teaching Development Office, and the first-year interdisciplinary Aquinas Program.

Wayne Curtis was born in Keenan, New Brunswick, on the banks of the Miramichi River. He was educated at the local schoolhouse and at St. Thomas University. He started writing prose in the late 1960s. His essays have appeared in the Globe and Mail, Outdoor Canada, Fly Fishermen, and the Atlantic Salmon Journal.

Other titles by Wayne Curtis