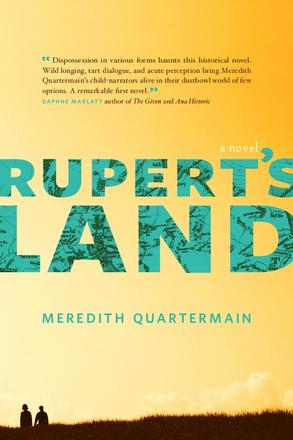 At the height of the Great Depression, two Prairie children struggle with poverty and uncertainty. Surrounded by religion, law, and her authoritarian father, Cora Wagoner daydreams about what it would be like to abandon society altogether and join one of the Indian tribes she’s ... Read more

At the height of the Great Depression, two Prairie children struggle with poverty and uncertainty. Surrounded by religion, law, and her authoritarian father, Cora Wagoner daydreams about what it would be like to abandon society altogether and join one of the Indian tribes she’s read so much about.

Saddened by struggles with Indian Agent restrictions, Hunter George wonders why his father doesn’t want him to go to the residential school. As he too faces drastic change, he keeps himself sane with his grandmother’s stories of Wîsahkecâhk.

As Cora and Hunter sojourn through a landscape of nuisance grounds and societal refuse, they come to realize that they exist in a land that is simultaneously moving beyond history and drowning in its excess.

Praise for Rupert's Land
"The background of despair is familiar from writers like Sinclair Ross, but the way Quartermain brings an age to life while staring unflinchingly at its attitudes and injustices through the eyes of children is reminiscent of To Kill A Mockingbird. The same innocent intelligence that characterizes Scout in that novel informs Cora’s and Hunter’s acute observations, conveyed in a blend of pitch perfect dialogue and inner voices. "
~ Margaret Thompson, The Coastal Spectator
"Quartermain's background in poetry is evident in the novel's lyricism. The imagery is vivid . .. the picture Quartermain paints will stay with you for some time. "
~ Megan Moore Burns, Quill & Quire
"The best fiction brings serious issues into sharper focus. Rupert’s Land did this for me because the storyline includes Indian residential schools in Canada — although this is the furthest thing from a preachy book. Gifted Canadian poet Meredith Quartermain shows rather than tells. "
~ Linda Diebel, Toronto Star

Meredith Quartermain is a poet and novelist living inVancouver, British Columbia. Her first book of poetry, VancouverWalking, won a BC Book Award for poetry; Recipes fromthe Red Planet was a finalist for a BC Book Award for fiction;and Nightmarker was a finalist for a Vancouver Book Award.A novel, Rupert’s Land, was released by NeWest Press in Fall2013. She has since published a collection of stories entitledI, Bartleby and a second novel, U Girl. She is also cofounder ofNomados Literary Publishers, who have brought out more than50 chapbooks of innovative Canadian and US writing since 2002.From 2014 to 2016, she was Poetry Mentor in the SFU Writer’sStudio Program, and she has enjoyed leading workshops atthe Kootenay School of Writing, The Toronto New School ofWriting and Naropa University.

Other titles by Meredith Quartermain