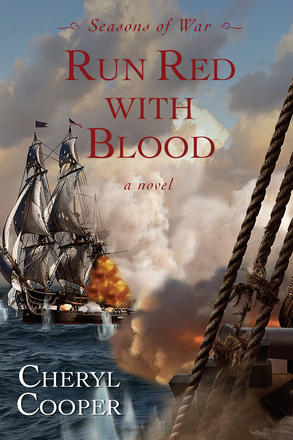 In late September 1813, Fly Austen is ordered back to the American coast, as England’s Royal Navy has suffered a series of humiliating defeats. Forced ... Read more

In late September 1813, Fly Austen is ordered back to the American coast, as England’s Royal Navy has suffered a series of humiliating defeats. Forced to return to sea with a skeleton crew, Fly persuades a reluctant Leander Braden to accompany him one last time. Emily, fearing she will be left behind in Portsmouth, disguises herself as a man and steals aboard Fly’s frigate. Meanwhile, young Magpie is captured by a press gang and hustled aboard a hostile ship, only to find himself in the dangerous company of the English traitor Thomas Trevelyan.

A shipwreck, a mutiny, and a bloody encounter with American ships on the Atlantic inflict devastating consequences on all.

Cheryl Cooper has a degree in English and Education from Queen's University. A former teacher of hearing-impaired children and a volunteer for the Children's Foundation of Muskoka, she lives in Bracebridge, Ontario, with her husband and two sons.

The night shrouded the carriage in a suffocating darkness as blackas the loam of a grave. The rain fell in torrents, pounding againstthe windows like the fists of a riotous mob. Pools of water hadgouged the serpentine road, causing the carriage wheels to swerve and careen,and Emily’s head to repeatedly strike the inside wall. She screamed forthe driver to stop, but it seemed the carriage had neither driver nor horses— headlong it hurtled along an unknown track, stoked by a ghostly energyof its own.

Across from her sat Lord Somerton in his sombre suit of clothes, his eyeslost in shifting shadows, his mouth nothing more than a grim slash acrossa pallid jaw. The pitching motion of the vehicle did little to disturb him. Aside from his finger-tapping on the head of his cane, he sat completely still.

“Where are you taking me?” Emily cried.

There was a slight curling of his lips, but silence was his answer.

The carriage escalated its reckless speed. Wet, shivering trees flew pastin the darkness — the twisted fingers of their branches scratching at themournful sky, searching for a way to escape the night. A set of iron gatessuddenly appeared and opened like jaws, intent on swallowing them whole. As they passed through them, Emily grew cold and shaky. She recognizedthis place. She knew its twisting pathway and the grey, foreboding groundsheaving around it like an angry sea.

Frantically, she wrestled with the latch on the carriage door. Dear God,no! She had already fled from here once before, stolen away in the nightwhen everyone was preoccupied with dancing and feasting and drinking —no one having seen her except for Fleda, who had wept at her leaving. Shehad gone looking for Leander and had managed to find him, somewherenear the sea.

The carriage came to an abrupt halt, and the leaden facade of theHall filled its windows, formidable and startling as an enemy frigate slippingfrom a swirling bank of fog. Candles burned in the Hall’s sash windows,and scurrying figures poured forth from its doors, rushing towardher. Roughened hands dragged her out into the pelting rain; voices shouted:“Hurry! Hurry! You have kept them waiting. ”

The shadowy molesters prodded her toward the house and into thefront entrance where the lights flickered upon a hawk-faced clergyman inhis black weeds and white collar. In his pious grasp, he carried the Bookof Common Prayer. Bound in a tight semicircle around him was anassemblage of familiar faces, yet there was no happy welcome in their stares. The Duchess of Belmont exuded indignation; her heavy husband wheezeddisinterest; Glenna McCubbin was a clucking hen of disapproval whileUncle Clarence’s mood was aloof and dark with bitter disappointment.

In his extravagant knee breeches and frock coat, Wetherell Lindsaypaced with impatience, his high heels clicking upon the marble floor, reflectionsof candlelight playing upon his bald pate where his wig was normallyaffixed. Lord Somerton eagerly steered Emily toward him. Wetherell pulledher roughly to his stout side and attempted to lock up her hands in his, butshe pushed away, shaking her head in defiance, refusing to participate intheir mad conspiracy. Enraged by the rebuff, Wetherell stomped off into asubterraneanpassage of the house, instructing the weddingguests to followhim, leaving the servants to douse the candlesand shutter the doors. Trailingthem was Fleda, a haunting, dreadful sadness in her green eyes. As shewalked away from Emily, the masonry and mortar of Hartwood Hall fellaround her, disintegrating and then vanishing into the earth.

One wedding guest stayed behind. He stood like a scarecrow in theabandoned field where the house had been. The uniform of an Americannaval captain hung upon his gaunt frame, the wind trifling with thethreadbare fabric of his jacket. The brim of his bicorne hat was crackedand moth-eaten. His feet were naked and bleeding; he possessed no mouth,and where his nose should have been there was only a skeletal cavity. Heturned to face Emily. His eyes — cold, dark, and merciless — sent icyfingers scuttling down her spine while the distance between them loudlyechoed a familiar word.

Unable to move, she watched as he raised a black pistol, cocked thehammer back, and levelled it at her pounding heart.

Other titles by Cheryl Cooper