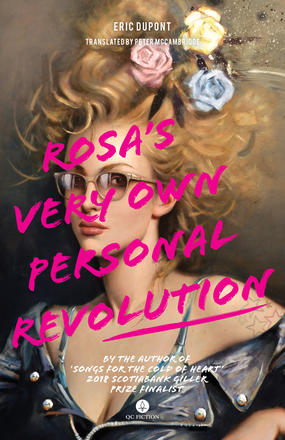 Rosa Ost grows up in Notre-Dame-du-Cachalot, a tiny village at the end of the world, where two industries are king: paper and Boredom. The only daughter of Terese Ost (a fair-to-middling trade unionist and a first-rate Scrabble player), the fate that befalls Rosa is the focus ... Read more

Rosa Ost grows up in Notre-Dame-du-Cachalot, a tiny village at the end of the world, where two industries are king: paper and Boredom. The only daughter of Terese Ost (a fair-to-middling trade unionist and a first-rate Scrabble player), the fate that befalls Rosa is the focus of this tale of long journeys and longer lives, of impossible deaths, unwavering prophecies, and unsettling dreams as she leaves her village for Montreal on a quest to summon the westerly wind that has proved so vital to the local economy.

From village gossips, tealeaf-reading exotic dancers, and Acadian red herrings to soothsaying winkles and centuries-old curses, Rosa's Very Own Personal Revolution is a delightful, boundary-pushing story about stories and the storytellers who make them - and a reminder that revolutions in Quebec aren't always quiet.

"This latest work has elements of the two previous Dupont novels to have made it into English, but it also has a charm all of its own, and is great fun to read. . . . if you like a bit of fun with your fiction in translation, then spending a couple of nights in Rosa?s company is just the ticket. " Tony Malone, Tony's Reading List

PRAISE FOR SONGS FOR THE COLD OF HEART

?spectacular? original in every sense? (Literary Review of Canada)

PRAISE FOR LIFE IN THE COURT OF MATANE

»Dupont is a writer of such intelligence and skill that he is able to not only become a philosopher, but a poet, who not only understands the horrors of a dysfunctional childhood, but also knows what is beautiful about it. And this book is a testament to his unwavering generosity towards both his characters and the people of Quebec. ? (Heather O?Neill, author)

?Dupont?s gift is that his stories have never been told in such a way before, could only ever be told in that way, and will never again be told like that. ? (Buried in Print)