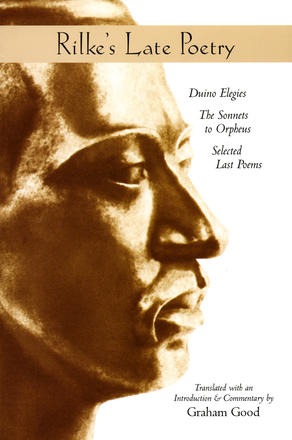 The late poetry of Rainer Maria Rilke (1875-1926) is one of the summits of European poetry in the twentieth century. Completed in 1922, as were T.S. Eliot’s The Waste Land and James Joyce’s Ulysses, Duino Elegies ranks with them as a classic of literary Modernism and as ... Read more

The late poetry of Rainer Maria Rilke (1875-1926) is one of the summits of European poetry in the twentieth century. Completed in 1922, as were T.S. Eliot’s The Waste Land and James Joyce’s Ulysses, Duino Elegies ranks with them as a classic of literary Modernism and as an inquiry into the spiritual crisis of modernity. The ten long poems grapple with the issue of how the human condition and the role of art have altered in the modern era, with the decline of religion and the acceleration of technology.1922 also saw the unexpected birth and completion of a new work, The Sonnets to Orpheus, a cycle of 55 sonnets giving lyrical expression to the philosophical insights gained in the Elegies. This is dedicated to Orpheus, the mythic singer and lyre player, who becomes a symbol for Rilke of the acceptance of transience in life and transformation in art. The third part of the late poetry consists of the less known brief lyrics Rilke wrote in the five years prior to his death in December 1926. These last poems constitute a kind of third testament, along with the Elegies and Sonnets.

“Graham Good’s translations of Rilke read like fresh, original poems. Fresh in their English rhymes and cadences, fresh as Rilke in transforming elegy into eulogy, sorrow into consolation, and the unforgiving world around us into a place where we can recreate ourselves. Good has heard and obeyed Pound’s rallying-cry of ‘Make it new!’ — and now he offers to restore us, as Rilke would restore us, through the poise and passion of his language.” —Robert Fagles, Professor Emeritus of Comparative Literature at Princeton University, and translator of best-selling editions of Homer, Aeschylus and Sophocles“Rilke’s late work (including Duino Elegies, The Sonnets to Orpheus and the last, short poems) is diaphanous and subtle, an urgent and suggestive record of the soul’s darkest fertile places — perhaps the most haunting such record we have in all of poetry. Graham Good’s translations are quiet and careful, with an ear, especially, for the shimmering experiences behind the words.” —Norman Fischer, Zen Buddhist abbot, priest and author of Slowly But Dearly and Opening to You: Zen-Inspired Translations of the Psalms“Elegant and vigorous, these translations give us the Rilke we know, anew. Graham Good’s sensitivity makes this collection especially intimate and moving.” —Stephanie Bolster, Governor General’s winner for poetry“Good’s translation . . . [is] as clear in imagery, as dexterous in syntax and smooth and sharp in rhythm as one could hope” —Canadian Notes and Queries“The strength of Good’s translation is that while he is faithful to the original, he strives to make the work relevant to current poetics. . . . It is now my definitive edition.” —Word: Canada’s Magazine for Readers + Writers“[Good’s] rendition is respectful and creative, and our perceptions of Rilke are deepened by reading his book.” —Vancouver Sun“the work is lucid and accessible, its lambent language as if Rilke had written the poems today. . . . an excellent text.” —Pacific Rim Review of Books

Other titles by Graham Good