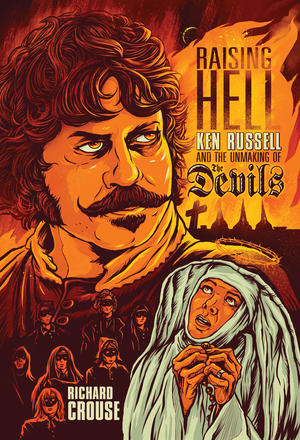 From exclusive interviews with director Ken Russell and new interviews with cast, crew, and historians, comes this examination of the beautifully blasphemous film The Devils. Based on historical fact, this controversial 1971 film is about an oversexed priest and a group of sexually ... Read more

From exclusive interviews with director Ken Russell and new interviews with cast, crew, and historians, comes this examination of the beautifully blasphemous film The Devils. Based on historical fact, this controversial 1971 film is about an oversexed priest and a group of sexually repressed nuns in 17th-century France and the ensuing trials and exorcisms that followed. Detailing the Production and the personalities of two of cinemaÓ³ great eccentrics, director Ken Russell and star Oliver Reed, Crouse delves deeper to explore the aftermath of the film. Chiefly, the question asked is How can a movie by one of the most famous filmmakers in the world end up banned, edited, and ignored by the company that owns it?

Richard Crouse is the regular film critic for CTV’s Canada AM, CTV’s 24-hour News Channel and CP24. His syndicated Saturday afternoon radio show, Entertainment Extra, originates on NewsTalk 1010. He is also the author of six books on pop culture history including Raising Hell: Ken Russell and the Unmaking of The Devils and The 100 Best Movies You’ve Never Seen, and writes two weekly columns for Metro newspaper. He lives in Toronto, Ontario.

"Raising Hellis a case study in what transpires when religion and art collide, and it should be read as a cautionary tale in the current climate of culture wars and clashes of civilizations." Ø·ww.StevenWBeattie.com

"Raising Hell is a book to satisfy fans and intrigue new viewers. Even if The Devils isn't your cup of tea, Crouse has created a fascinating portrait of the director's vision and the studio's lack of foresight." Ø·ww.PlanetFury.com

"In Raising Hell Richard Crouse has written an entertaining and informative account of Ken Russell and his adventures on The Devils. Russell remains an authentic and original voice in British cinema, and this is the funny and sad tale of the rise and fall and rise of one of his most controversial films." ØŠohn Landis, film director, The Blues Brothers

"The Devil is in the details, and to appreciate why so many filmmakers are possessed by Ken Russell's outrageous masterpiece, this book is a must." Ø”erry Gilliam, film director, 12 Monkeys and Fear and Loathing in Las Vegas

"Reading this book was pure pleasure for me. It made me desperate to see Ken Russell's gorgeous, crazed epic again." Ø„avid Cronenberg, film director, The Fly and Naked Lunch

"An exhaustive, vivid and passionate account of one of the most powerful and transgressive films ever made. This is not only a great book, it's a necessary book." Ø‡uillermo del Toro, film director, Hellboy and Pan's Labyrinth

Other titles by Richard Crouse