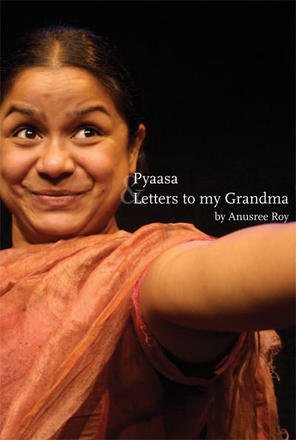 Pyaasa & Letters to My Grandma

Pyaasa & Letters to My Grandma

Set in Calcutta, Pyaasa tells the story of Chaya, an eleven-year-old untouchable who dreams of nothing more than learning her times tables. When Chaya's mother begs a woman from a higher caste to give Chaya a job at a local tea stall, Chaya's journey from childhood to adulthood ... Read more

Set in Calcutta, Pyaasa tells the story of Chaya, an eleven-year-old untouchable who dreams of nothing more than learning her times tables. When Chaya's mother begs a woman from a higher caste to give Chaya a job at a local tea stall, Chaya's journey from childhood to adulthood begins and ends over ten days. A moving and heartfelt play, Pyaasa illustrates with subtlety and nuanced truth the inequalities and injustices that persist through the Indian caste system.

In the haunting Letters to My Grandma, Malobee unearths letters detailing her grandmother's fight to survive the 1947 partition of India, which resonates with Malobee's own struggles to create a new life in present-day Toronto. A grand multi-generational tale of hatred, regret, love, and forgiveness, Letters to my Grandma weaves the remarkable stories of these two women together, inextricably linking their histories and delving into how the hatred bred between Hindus and Muslims in the Old World consumes families in Canada today.

Anusree Roy is a Governor General’s Literary Award–nominated writer and actor whose work has premiered internationally. Her plays include Trident Moon, Sultans of the Street, Brothel #9, Roshni, Letters to my Grandma, and Pyaasa. Her plays and performances have won her four Dora Mavor Moore Awards along with multiple nominations. She is the recipient of the KM Hunter Artist Award, the RBC Emerging Artist Award, and the Carol Bolt Award, was named as a protégé of the Siminovitch Prize, and was a finalist for the Susan Smith Blackburn Prize. She lives in Toronto.

Thomas has worked across Canada and internationally as a director, playwright, dramaturg, instructor, and movement coach. His productions have received eleven Dora Mavor Moore Awards and eight nominations; he received the 2011 Dora Mavor Moore Guthrie (Stratford Festival), and has been nominated for the Pauline McGibbon Award and twice for the John Hirsch Award (2008 & 2011). He is currently Artistic Director of Prairie Theatre Exchange.

"Letters to My Grandma is a courageous and honest portrayal of loneliness, regret, forgiveness, and the divide between immigrant youth and the loved ones they leave behind. "

"Her script is direct and passionate, and her performance is spine-tinglingly alive and confident. "

Other titles by Anusree Roy