In Pictographs, Ojibway artist James Simon Mishibinijima brings to life the legends passed down to him by generations of Elders. In this collection of drawings, each image tells a story, silently communicating lessons of harmony, interconnectedness and peace.

In Pictographs, Ojibway artist James Simon Mishibinijima brings to life the legends passed down to him by generations of Elders. In this collection of drawings, each image tells a story, silently communicating lessons of harmony, interconnectedness and peace.

James Simon Mishibinijima, one of Canada's foremost Native artists, has created a unique body of work over the past four decades which has attracted a loyal following in North America and overseas. He was born in 1954 in Wikwemikong, Manitoulin Island, where he grew up immersed in the legends of the Ojibway people.

From the 1970s to the present, Mishibinijima has explored many of the sacred places around Manitoulin Island and originated the coveted Mishmountain series, among others. His uplifting philosophy has found resonance with those who seek solace in the midst of tragedy, and meaning in a world that is often confusing and frightening.

In his work he underscores the wisdom of the Elders' teachings as a way to foster respect and peace. He also emphasizes the interconnectedness of all life and calls upon nations to preserve our natural surroundings for the benefit of our children.

The development of a pictographic style

At the core of Mishibinijima's pictographic art is a conception that pictographs painted on rock faces across the Canadian Shield and that are incised on sacred birch bark scrolls of the Great Medicine Society of the Anishnabek are the repositories of religion, ethics and history of the Anishnabek people. His art reflects a lifelong quest of continual searching for ways in which the past and present, the spiritual and the human, the animate and inanimate can co-mingle in things both seen and sensed.

Mishibinijima has spent much of life exploring the islands and waterways of Manitoulin Island, the shores of Birch Island, the La Cloche mountains and the northern edges of Lake Huron. Contemplative, patient, Mishibinijima's purpose on his journeys of discovery is attuning himself to a place's spiritual energy radiating from land and water, and from the souls that have lived and travelled along these routes for millennia. Watching, listening, being attentive to subtle visions that connect him with Mother Earth, her children and the souls of ancestors connect Mishibinijima's present with the ancient past.

According to legend, spirit portals exist all around Manitoulin Island that allow access to the spirit world for prayers that are offered up to those who have come before and who have passed on. Conversely, these same portals also allow spirits to return to the human realm and initiate contact. Over the course of his time living in these landscapes Mishibinijima has developed a rare facility at reading-internalizing-the language of the pictographs that are painted and etched onto the rocks above the water line and making their ancient grammar tell his own stories. They are visual markers of these portals. His own pictographs are part of this ancient tradition.

`Unique and an inherently fascinating read from cover to cover, Pictographs: The Graphic Art of James Simon Mishibinijima is an uncommon and very special addition to personal, community, and academic libra[ries]....'

`Arresting, elegant, and powerful, the pictographs approach storytelling in an entirely new way to draw readers into a world of spirits, animals, lessons, and knowledge. A silent exploration of interconnectedness and history, the collection speaks volumes.' 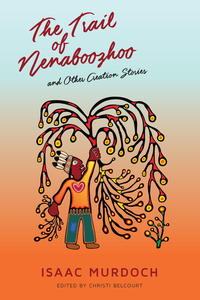 A collection of sacred Anishinaabe creation stories and the spirit Nenaboozhoo, The Trail of Nenaboozhoo and Other Creation Stories (Kegedonce Press) is the stunning result of a collaboration between Ojibwe storyteller and artist Bomgiizhik Isaac Murdoch and Michif (Métis) ... Read more