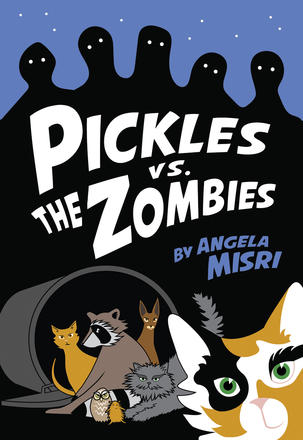 Pickles vs. the Zombies

Pickles vs. the Zombies

The comfortable life of Pickles, the calico housecat, is turned upside down when humans succumb to a zombie apocalypse. She doesn’t know where her “pet” – human child Connor – has gone, ... Read more

The comfortable life of Pickles, the calico housecat, is turned upside down when humans succumb to a zombie apocalypse. She doesn’t know where her “pet” – human child Connor – has gone, only that there are zombies everywhere.

Determined to find Connor, Pickles sets off with her cat friends and a streetwise raccoon, exploring a world she has only seen through a window. Fending off human zombies, street cats from the wrong side of the track, and a fearsome gang of chipmunks, Pickles and her crew search for remnants of human society.

"Pickles and her gang are endlessly engaging, possessing ingenuity, kindness, courage, and awesome sparks of humour. "

"Pickles vs. the Zombies is a fun read that takes a typical zombie narrative but tells it from the perspective of the pets left behind. "

"This is a story about love, friendship, and perseverance, packed with a lot of action (and zombies) that is sure to keep young readers engaged till the very end. "

"They made the strangest fellowship since the one in the Lord of the Rings. Instead of a wizard, an elf, and others, this group consisted of several cats, a raccoon, and a hyperactive hamster led by the courageous Pickles determined to find his beloved human, Connor. Angela Misri takes us on a heart-stopping roller-coaster of a ride through sewers, encounters with rats, an evil opossum, and the ever-present zombies. This is a fabulous story of adventure, friendship, and the true meaning of family. "

"This book finally answers that all important question: what will pets do during a zombie apocalypse? A fast-paced, funny read with a pinch of fear and a dollop of yuck. No matter what kind of pet you have, you’ll love these four-legged survivors. "

— Arthur Slade, author of <i>The Hunchback Assignments</i> and <i> Crimson</i>

"This action packed story will appeal to animal lovers and zombie fanatics alike. A novel filled with hope, excitement and a touch of terror, it is sure to be a hit with fans of many different genres. "

Other titles by Angela Misri