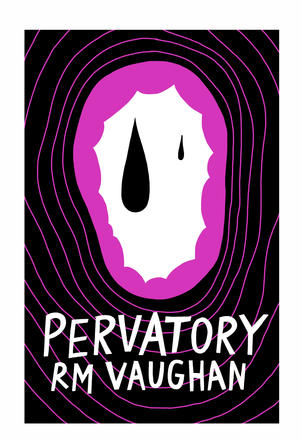 A novel about Berlin: a city for artists and libertines, a perfect place to find love and madness.

A novel about Berlin: a city for artists and libertines, a perfect place to find love and madness.

When he tired of Toronto’s insular scene, art critic Martin Heather fled to Berlin, where he tried to sleep his way through the entire population of gay men. And then he met Alexandar, who began to tutor Martin in increasingly violent sex – and in love.

Pervatory is a series of journal entries about Martin and Alexandar’s relationship. But interjections from the present, where Martin has been institutionalized, suggest that the hints we get of his increasing instability and obsession with the idea that his apartment is haunted by an evil spirit may have led to something dire …

RM Vaughan was an astute art critic, a dazzling poet, and an important queer activist. His untimely death in October 2020 was a tremendous loss to the queer and literary communities. This novel is what he left for us.

RM Vaughan was a writer and video artist. He was the author of many plays and books, including Bright Eyed: Insomnia and its Cultures, Troubled, The Monster Trilogy, and A Selection of Dazzling Scarves, and contributed articles on culture to a wide variety of publications including being a Contributing Editor for Momus.ca and an art critic for the Globe and Mail. Vaughan’s short videos have played in festivals and galleries across Canada and around the world.

Other titles by RM Vaughan