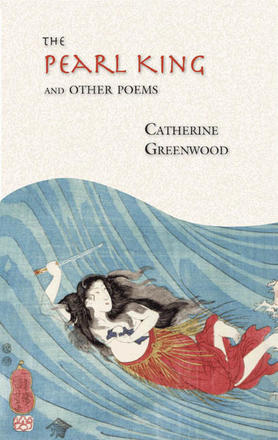 Pearl King and Other Poems, The

Pearl King and Other Poems, The

Catherine Greenwood draws on the stories and legends which surround the development of cultured pearls by Mikimoto, the fabulous Pearl King, to engage a rich array of themes, including the clash between an aesthetics of refinement and nuance, and mass manufacture. With discerning ... Read more

Catherine Greenwood draws on the stories and legends which surround the development of cultured pearls by Mikimoto, the fabulous Pearl King, to engage a rich array of themes, including the clash between an aesthetics of refinement and nuance, and mass manufacture. With discerning wit and a large range of styles and voices, she holds up each subject for contemplation as though it were a pearl, and explores the sometimes bizarre consequences of an overwhelming rage for beauty.

Bless me with abalone abundant as mushrooms,
Oysters dropping ripe as plums into my palm.
Let my births keep me ashore a few days only,
Only for a little while let labour make me rest.

from “The Diving Girls’ Prayer”

When, in other sections of the book, Catherine Greenwood turns her attention to such matters as the still birth of a calf, teeth, moles, or the Shetland Island stone, she does so with the same care for the exact fit of style, the same sharply-angled craft.

“The ancient Taoists believed that a pearl was grounded at the soul’s centre, that it took wisdom and clarity to create its essence. Catherine Greenwood’s first collection of poems is proof of that. Here is a new pearl, the beginning of a strand I hope, that will continue to be added to with such depth of field and luminosity.” -- Don Domanski

Catherine Greenwood’s poetry has been widely published in journals and anthologies; her first book, The Pearl King and Others (Brick Books, 2004),was a Kiriyama Prize notable book. She works for British Columbia’s Ministry of Justice in Victoria, where she lives with her husband, the writer Steve Noyes.

Other titles by Catherine Greenwood