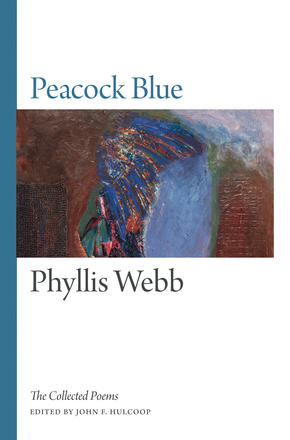 When Phyllis Webb published Wilson’s Bowl in 1980, Northrop Frye hailed it as “a landmark in Canadian literature”: landmark, an event that marks a turning point in something (in this case, Canadian literature); and an instantly recognized feature of a landscape (in this ... Read more

When Phyllis Webb published Wilson’s Bowl in 1980, Northrop Frye hailed it as “a landmark in Canadian literature”: landmark, an event that marks a turning point in something (in this case, Canadian literature); and an instantly recognized feature of a landscape (in this case, the landscape of Canadian poetry). Wilson’s Bowl was Webb’s fifth volume of poetry. Three more followed and then she fell silent, turning from literature to abstract painting.

Peacock Blue compiles in a single volume all of Webb’s published, unpublished, and uncollected works from a writing career that spanned fifty years. It offers readers the opportunity to relish the arc of Webb’s entire poetic oeuvre, from the modernist lyricism of her early works, to the groundbreaking volume, Naked Poems (1965), in which Webb created for herself a new minimalist language; from Wilson’s Bowl to what Douglas Barbour calls “Webb’s loving and subversive engagement with the ghazal” in Water and Light (1984); and finally to the postmodernist prose poems of Hanging Fire (1990).

The concluding section of Peacock Blue contains almost fifty poems, some of which have never been published before. It also includes brilliant but forgotten poems and poetic surprises. Brenda Carr has suggested that one of Webb’s later essays, “Message Machine” (1990), “initiates a re-reading of her poetics and practice … Against her anxiety that she is a passive ‘message machine’ for masculinist culture. ” However, as Carr points out, “Webb posits another possibility – ‘cross-dressing. ’ She theorizes her mimicry of the male persona as analogous to a ‘masquerade’ or ‘street theatre’ and in so doing reconstructs even her earlier poems as a performative space in which agency is possible. ” The truth of Carr’s insight becomes increasingly apparent to anyone who undertakes to read through Webb’s entire poetic output, gathered together, at last, in Peacock Blue.

“Webb’s poetic oeuvre displays a range and formal daring … unmatched in Canadian letters. … she has been and remains one of our finest, most linguistically sensitive poets. … Peacock Blue should long have a place in any and all CanLit libraries”
—Canadian Literature

“[Phyllis Webb] has always been distinguished by the profundity of her insights, the depth of her emotional feeling, the delicacy and accuracy of her rhythms, the beauty and mysterious resonance of her images—and by her luminous intelligence. ”
—Stephen Scobie

“a vibrant intelligence coupled with a wry wit … Webb’s dedication to social justice is evident in her poetry. … It’s evident from this book that Webb knew many of the major Canadian writers. She dedicates poems to many writers, she refers to writers, and she celebrates the words of others. Trying to capture [this volume] in a review is like trying to catch wind. There’s too much and it’s too powerful. Ultimately all I can say is [‘Read this poet’]. ”
—Maple Tree Literary Supplement

About Naked Poems (1965):
“Naked Poems … is one of the most influential works of its time, for it suggested a new vision of the book-length poem which profoundly affected a number of poets in the following literary generations. Full of lyric intensity yet transcending mere lyric posturing, Naked Poems is Canada’s first masterpiece of process poetics, a series of precisely crafted minimal texts which remain open to the possibilities of what the third section calls the ‘Non Linear. ’ Robert Kroetsch has made perhaps the finest and most concise statement about this innovative and concise work: ‘On nakedness and lyric and yet on a way out, perhaps a way out of the ending of the lyric too, with its ferocious principles of closure, a being compelled out of lyric by lyric. ’”
—Canadian Encyclopedia

“Reading her work this way is like watching the seasons change, for people who have been writing as many years as she has don’t ordinarily stand still for long. … she has remained active politically, gradually settling on a mixture of anarchism, feminism and environmentalism that is to be found only on the West Coast. … Peacock Blue is a most important book. It’s both a testament and a trophy. ”
—Vancouver Sun

Other titles by Phyllis Webb

Other titles by John F. Hulcoop