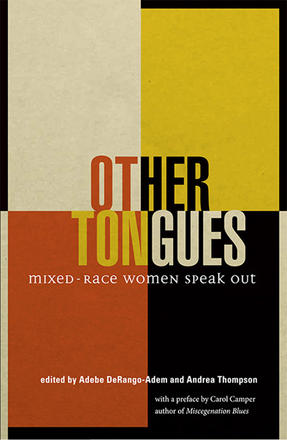 Other Tongues: Mixed-Race Women Speak Out is an anthology of poetry, spoken word, fiction, creative non-fiction, spoken word texts, as well as black and white artwork and photography, explores the question of how mixed-race women in North America identify in the twenty-first ... Read more

Other Tongues: Mixed-Race Women Speak Out is an anthology of poetry, spoken word, fiction, creative non-fiction, spoken word texts, as well as black and white artwork and photography, explores the question of how mixed-race women in North America identify in the twenty-first century. Contributions engage, document, and/or explore the experiences of being mixed-race, by placing interraciality as the center, rather than periphery, of analysis.

Adebe DeRango-Adem is a writer and doctoral student at the University of Pennsylvania. Her work has been published in various North American sources, including Descant, CV2, Canadian Woman Studies and the Toronto Star. She won the Toronto Poetry Competition in 2005 to become Toronto's first Junior Poet Laureate. In 2008, she attended the summer writing program at Naropa University, where she mentored with Anne Waldman and the late Amiri Baraka. Her debut poetry collection, Ex Nihilo (Frontenac House, 2010) was one of ten manuscripts chosen in honour of Frontenac House's Dektet 2010 competition, using a blind selection process by a jury of leading Canadian writers: bill bissett, George Elliott Clarke, and Alice Major. Ex Nihilo was longlisted for the Dylan Thomas Prize, the world's largest prize for writers under thirty. She is also the co-editor, alongside Andrea Thompson, of Other Tongues: Mixed-Race Women Speak Out (Inanna Publications, 2010).

Andrea Thompson is one of the most well known poets in the Canadian spoken word scene and has performed her poetry at venues across North America and overseas for the past twenty years. Thompson’s debut poetry collection, Eating the Seed (2000), has been featured on the reading list at the University of Toronto, and at the Ontario College of Art and Design, and her spoken word CD One, was nominated for a Canadian Urban Music Award in 2005. One of the pioneers of the SLAM poetry scene in Canada, Thompson was awarded the Canadian Festival of Spoken Word’s Poet of Honour: For Outstanding Achievement in the Art of Spoken Word in 2009. Thompson is the co-editor of the anthology Other Tongues: Mixed Race Women Speak Out (Inanna, 2010), and is a recent graduate of the University of Guelph’s MFA Creative Writing program. She currently teaches Spoken Word: Poetry and Performance through the Ontario College of Art and Design’s Continuing Studies Department. Over Our Heads is her first novel. Andrea lives in Toronto, Ontario.

In the past 20 years Canada has seen a few mixed race anthologies that reflect both the time, place and language that we use to talk about being of mixed heritage and the many complicated social locations this takes us to. Other Tongues' collection of personal essays, poetry and visual art is an excellent addition to the body of writing already out there. In a nice circular way that happens sometimes, Carol Camper wrote the introduction. The pieces are all short to very short, with the longest piece at around six pages and the average length about two pages long. This is one of the anthology's strengths as it can show the breadth and range of experiences as well as the vast array of how women have dealt with / coped with / celebrated what their racial identity means to them in the context of Canada and the U.S., where the majority of the contributors live. All in all a wonderful collection, with a large selection of very diverse experiences. Highly recommended. 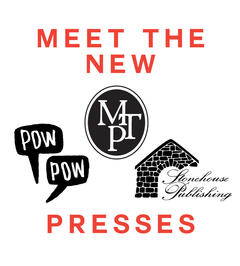 Other titles by Andrea Thompson