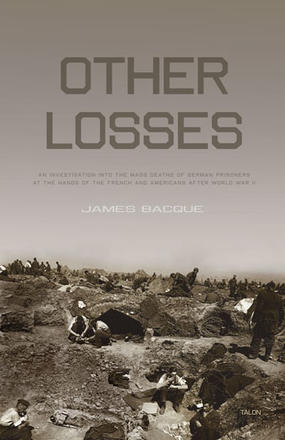 Other Losses caused an international scandal when first published in 1989 by revealing that Allied Supreme Commander Dwight Eisenhower’s policies caused the death of some 1,000,000 German captives in American and French internment camps through disease, starvation and exposure ... Read more

Other Losses caused an international scandal when first published in 1989 by revealing that Allied Supreme Commander Dwight Eisenhower’s policies caused the death of some 1,000,000 German captives in American and French internment camps through disease, starvation and exposure from 1944 to 1949, as a direct result of the policies of the western Allies, who, with the Soviets, ruled as the Military Occupation Government over partitioned Germany from May 1945 until 1949.

An attempted book-length disputation of Other Losses, was published in 1992, featuring essays by British, American and German revisionist historians (Eisenhower and the German POWs: Facts Against Falsehood, edited by Ambrose & Günter). However, that same year Bacque flew to Moscow to examine the newly-opened KGB archives, where he found meticulously and exhaustively documented new proof that almost one million German POWs had indeed died in those Western camps.

One of the historians who supports Bacque’s work is Colonel Ernest F. Fisher, 101st Airborne Division, who in 1945 took part in investigations into allegations of misconduct by U. S. troops in Germany and later became a senior historian with the United States Army. In the foreword to the book he states: ?Starting in April 1945, the United States Army and the French Army casually annihilated about one million [German] men, most of them in American camps ? Eisenhower’s hatred, passed through the lens of a compliant military bureaucracy, produced the ­horror of death camps unequalled by anything in American military ­history ? How did this enormous war crime come to light? The first clues were uncovered in 1986 by the author James Bacque and his ­assistant. ”

This updated third edition of Other Losses exists not to accuse, but to remind us that no country can claim an inherent innocence of or exemption from the cruelties of war.

James Bacque
James Bacque is a novelist, book editor, essayist and historian whose work has helped raise awareness in human rights issues associated with war crimes, particularly spurring debate on and research into the treatment of German POWs at the end of World War II.

His fiction titles include The Lonely Ones, 1969 (Big Lonely in the paperback edition, 1970); A Man of Talent, 1972; Creation (with Robert Kroetsch and Pierre Gravel), 1972; The Queen Comes to Minnicog, 1979; and Our Fathers’ War, 2006. His history titles include Crimes and Mercies, an immediate bestseller upon release, and Other Losses.

“Other Losses is a fine example of historical investigation, which also serves as a reminder of what sort of country Americans really live in. ”
– Journal of Historical Review

OTHER LOSSES: AN INVESTIGATION INTO THE MASS DEATHS OF GERMAN PRISONERS AT THE HANDS OF THE FRENCH AND AMERICANS AFTER WORLD WAR II by James Bacque.

The closing months of World War II, well after German military personnel knew that thev had lost the war. witnessed some of the most bitter resistance put up by the Wehrmacht. The soldiers of the Reich fought desperately against the advancing Red Army in an effort to permit as many civilians and soldiers as possible to flee to the West. Although the policy of "Unconditional Surrender" had been announced two years before, the Germans hoped that the Western allies would not treat their prisoners as brutally as the Russians were likely to.

What actually befell the German POWs has been succinctly stated by Col. Ernest F. Fisher, a former senior historian with the United States Army, in the foreword to James Bacque's explosive new book, Other Losses:

More than five million German soldiers in the American and French zones were crowded into barbed wire cages, many of them literally shoulder to shoulder. The ground beneath them soon became a quagmire of filth and disease. Open to the weather, lacking even primitive sanitary facilities, underfed, the prisoners soon began dying of starvation and disease. Starting in April 1945, the United States Army and the French Army casually annihilated about one million men, most of them in American camps.

Although hundreds of books have been written about the end of the Third Reich, including biographies of the major Allied political and military figures, this especially ugly chapter in the history of the Second World War came to light over 40 years after the war concluded. And it took a Canadian novelist to stumble across, then organize, the pertinent evidence, not an academic historian or one of the Armed Forces staff writers. In 1986, James Bacque was doing research for what was intended to be his first non-fiction work, a book on a hero of the French Resistance, Raoul Laporterie. Bacque interviewed a former German POW, who credited Laporterie with saving his life. The POW went on to note that in just one month, 25 per cent of his comrades had died while in French captivity. This set Bacque on a new trail. The results of his careful investigation is the work under consideration here. The term "Other Losses" was used in the U. S. Army "Weekly Prisoner of War & Disarmed Enemy Forces Reports," to cover deaths and escapes. U. S. Army officials have admitted that escapes accounted for less than 2 per cent of these "other" losses. The rest died. After sifting though U. S. Army files stored at the National Archives in Washington, D. C., where he was assisted by Col. Fisher, as well as relevant Canadian, British, and French records, Bacque has come to the conclusion that:

… enormous numbers of men of all ages, plus some women and children, died of exposure, unsanitary conditions, disease and starvation in the American and French camps in Germany and France … The victims undoubtedly number over 800,000, almost certainly over 900,000 and quite likely over a million. Their deaths were knowingly caused by army officers who had sufficient resources to keep the prisoners alive.

Bacque's research indicates that Germans who surrendered to the British or Canadians shared a different fate from that of the Germans in American, French, or Soviet hands when the war ended. The Canadian Prime Minister, Mackenzie King, early on issued a protest to the American authorities - which was ignored. Field Marshal Bernard Montgomery, who had no love for the Germans, seemed to reflect the views of many British, when he remarked:

"I hold no brief for the Germans except humane treatment … I do not think we should provide a ration less than Belsen. "

Under the Geneva convention, German prisoners should have received adequate food, shelter, and medical attention. As the war-time records disclose, food and other needed supplies were available in abundance in the Western occupation zones. But thousands of POWs were kept for months in wire cages with little food and virtually no shelter.

By arbitrarily classifying their captives as "Disarmed Enemy Forces" rather than "prisoners of war," American military authorities were able to keep the Red Cross from monitoring conditions in the holding pens and to prevent the IRC from delivering surplus food and supplies to the German POWs. Train loads of provisions were actually turned away.

Since SHAEF (Supreme Headquarters, Allied Expeditionary Forces) imposed stricter censorship after VE- Day than during the war, the general American public was largely kept ignorant of conditions prevailing in post-war Europe (opinion polls clearly indicated that, despite years of propaganda, the American public did not favor a vengeful peace).

When rumors began to circulate about the treatment received by prisoners in some of the camps, the French stated that the POWs were well treated. The American authorities planted stories in the New York Times blaming the French. Later, both the French and Americans denied having as many prisoners as they actually had captured. They said that missing soldiers were undergoing Soviet captivity (the existing U. S. records put paid to this lie).

Who was responsible for these crimes? Bacque blames the Supreme Allied Commander, General Dwight D. Eisenhower, as well as General Charles De Gaulle. Ike is portrayed as the architect of the policy, which resulted in "slow deaths," since it was he who implemented general directives that originated with Franklin Roosevelt and Henry Morgenthau. Care of the POWs was among Eisenhower's official responsibilities. The author presents evidence that Ike knew what was going on and took active measures to reduce rations and prevent other necessities from reaching German detainees. As stated above, many prisoners were reclassified as Disarmed Enemy Forces (DEFs). They remained in captivity. But since they were no longer recognized as POWs, their treatment was not conditioned by provisions of the Geneva Convention.

Bacque's detective work has resulted in what amounts to a terrible indictment of U. S. and French policy. Professor Stephen E. Ambrose, an Eisenhower biographer and editor of his official papers, admits that Bacque "has made an important discovery. "

Yet, Other Losses, for several months now a best-seller in Canada and Germany, has been rejected by over thirty publishers in this country. It is currently available only by mail from the IHR and to those who are able to visit Canada.

Bacque's book, and the reception it has been accorded in the United States, raises a number of questions. It highlights the failure of international law to protect combatants and non- combatants, alike. And it shows the consequences of over thirty years of anti-German propaganda, dating from before the outbreak of World War I. The "German as Beast" was a familiar theme and if Eisenhower and his associates had little regard for the Germans, they were reflecting views nurtured by the Allies during both world wars.

Bacque, who is not an academic historian, has embarrassed the Establishment here. His book reflects the low state of academic and officer government history in this country. Anfl the fact that he can't find a U. S. publisher is another example of how censorship works in "the land of the free and the home of the brave. " His book has not been banned. Like other important works that deal with what James J. Martin characterizes as "inconvenient history," Other Losses simply has not been printed. After all, you don't have to go to the trouble of "banning" what never gets into print in the first place.

Other Losses is a fine example of historical investigation, which also serves as a reminder of what sort of country Americans really live in.

Other titles by James Bacque