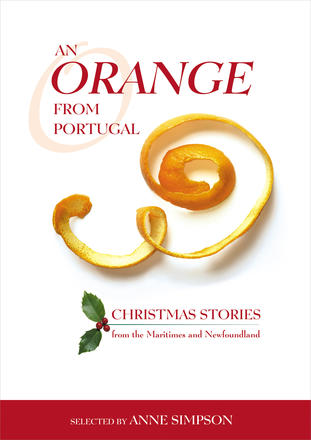 It's often said that the main export of the Maritimes is Maritimers, and the same is true of Newfoundland. "Going down the road" is a way of life, but so is coming home for Christmas. It is tradition marked by happiness, fun, and sometimes less comfortable emotions. Given the ... Read more

It's often said that the main export of the Maritimes is Maritimers, and the same is true of Newfoundland. "Going down the road" is a way of life, but so is coming home for Christmas. It is tradition marked by happiness, fun, and sometimes less comfortable emotions. Given the regional penchant for yarn spinning, this common experience yields an abundance of stories.

In An Orange from Portugal, editor Anne Simpson takes liberties with the concept of "story" to produce a book bursting with Christmas flavour. Many of her choices are fiction, others are memoirs, tall tales, poems, or essays, and still others defy classification. Some authors are nationally and even internationally famous, some are well known in the region, and others are published here for the first time. Spanning more than a century of seasonal writing, the collection includes a description of killing a pig aboard the sailing ship Argonauta for Christmas dinner; Hugh MacLennan"s Halifax waif who wants nothing more than for Santa to bring him a real orange, an orange from Portugal; a story by Alden Nowlan and another by Harry Bruce giving very different versions of what the animals in the barn do on Christmas Eve; a story about Jewish children hanging up their stockings; and very new work by young writers Lisa Moore and Michael Crummey. Beautiful poems by Lynn Davies, Milton Acorn and others leaven the collection for readers of all persuasions. Other authors include: Wayne Johnston, Mary Pratt, David Adams Richards, Carol Bruneau, Wilfred Grenfeld, L. M. Montgomery, Paul Bowdring, Grace Ladd, Herb Curtis, Joan Clark, Ernest Buckler, Rhoda Graser, Bert Batstone, Elisabeth Harvor, David Weale, Charles G. D. Roberts, Ronald F. Hawkins, Mark Jarman, Elsie Charles Basque, Richard Cumyn, Herménégilde Chiasson, Stan Dragland, Alistair MacLeod, and Bernice Morgan.

An Orange from Portugal is a Christmas feast, with the scent of turkey and the sound of laughter wafting from the kitchen, and a flurry of snow outside the window.

"[Christmas] is a conflict of emotion captured beautifully in this terrific, ranging collection. .. The significance of the orange as the sensuous apotheosis of the season is especially pervasive in the older stories. .. plenty here to warm the cockles of the heart, too, should they require warming. .. Despite its title, the vast majority of these narratives are strong enough to be enjoyed during any season. "