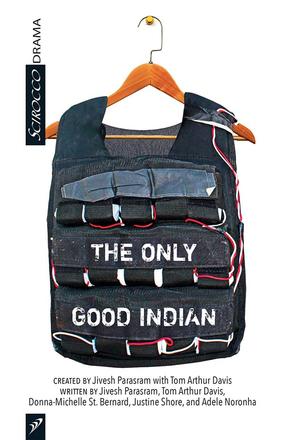 Only Good Indian, The

Only Good Indian, The

The Only Good Indian is part lecture, part meditation, and part threat. Or maybe a sacrifice. Each incarnation of The Only Good Indian recruits a new artist to step into the radical headspace of a suicide bomber. In turn, each performer straps themselves into a suicide vest -- ... Read more

The Only Good Indian is part lecture, part meditation, and part threat. Or maybe a sacrifice. Each incarnation of The Only Good Indian recruits a new artist to step into the radical headspace of a suicide bomber. In turn, each performer straps themselves into a suicide vest -- and struggles to rationalize to the audience such an "irrational" decision. It dissects where our similarities begin and where they end, forcing both the performer and the audience to ask themselves: what would I die for? Blending political theory with dark satire, authors Donna-Michelle St. Bernard, Tom Arthur Davis, Adele Noronha, Jivesh Parasram, and Justin Shore take you on a wild ride through their genealogical relationships to colonization, occupation, otherness, and indigeneity.

Tom Arthur Davis is a T'karonto-based arts worker originally from the unceded territory of the Algonquin nation (Ottawa) with colonial lineage from the ancestral homelands of the Beothuk and the Mi'qmak peoples (Newfoundland). In 2009 he co-founded Pandemic Theatre, where he has created most of his work in close collaboration with Jivesh Parasram. Since 2018, Tom has acted as a producer for Why Not Theatre where he leads the company's Provoke Activities (initiatives that help remove barriers for artists). Tom's work with Pandemic and Why Not has toured across Turtle Island and overseas, including collaborations with Barbican Centre, Battersea Arts Centre, Buddies in Bad Times Theatre, Canadian Stage, The Cultch, High Performance Rodeo, Latitude Festival, National Arts Centre, PuSh Festival, Sydney Festival, The Theatre Centre, and Theatre Passe Muraille. His works for the stage include Mahmoud (co-writer), Take d Milk, Nah? (co-creator/dramaturge), and The Only Good Indian (co-creator/co-writer).

Jivesh Parasram is an award-winning multidisciplinary artist of Indo Caribbean descent (Cairi/Trinidad & Tobago). Jivesh grew up in Mi’Kma’Ki (Nova Scotia) before moving to Tkaronto (Toronto). In 2009 he co-founded Pandemic Theatre, through which much of his work has been created, often in close collaboration with co-founder Tom Arthur Davis. He is a recipient of two Harold Awards for his service to the independent theatre community in Tkaronto, including the Ken McDougall Award. Jivesh won the 2018 Toronto Arts Foundation Emerging Artist Award, and was a member of the second cohort of the Cultural Leaders Lab with the Toronto Arts Council and the Banff Centre. In 2018, Jivesh took on the position of artistic director for Rumble Theatre. He lives primarily in the unceded Coast Salish territories (Vancouver, BC).

Lecture -- Can I Say Indian

(There is a table stage right and a stool stage left.

On the table there is a laptop, used by the performer to control their own light and video cues.

On the stool sits a suicide vest. Also used by the performer to. .. you know. ..

The performer enters through the house.

The performer should acknowledge the traditional keepers of the land they are sharing space on. This should ideally be in keeping with the customs of the area. This should be performed off book, honest,reflexive.

The Performer puts on the suicide vest with an air of ritual. It's an invocation.

You know what a cannibal is?

Cannibal: consumer of the flesh of one's own species.

In the Caribbean, European explorers classified the Indigenous people they encountered as one of two types: Cannibal or peaceful. Carib or Arawak. Naughty or nice.

This is a suicide vest.

I made it myself.

It's gonna off in about thirty minutes.

(A countdown clock appears, then disappears. )

The thing is, it's actually not that hard to make.

You can get most of the stuff online.

Where no one can see you. .. except CSIS.

(Pulls out an explosive from the vest. )This is C3.

It's a lot like C4, only you can get it on Amazon.

With the amount I have strapped to me now --

If I were to stand back here -- (Moves all the way upstage. )

The blast radius would reach only about the lip of the stage.

(Moves all the way downstage. )

So if you aren't comfortable with that. ..

Not that it makes much of a difference.

People think that it's the explosion that does the most damage -- like, that kills other people --

"Radical and thought-provoking. .. Delves deep into the history, politics and logics of occupation, colonization and indigeneity. " --Jordan Bimm, NOW Magazine (Toronto, ON)