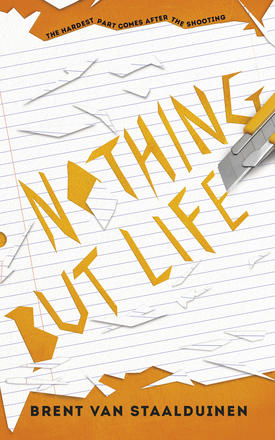 White Pine Award 2022 — Shortlisted
During a sweltering summer, Dills must come to terms with a horrific crime and the parent he loves who committed it.

Dills and his mom have returned to Hamilton, her hometown, hoping to leave the horrors of Windsor behind. But it’s impossible ... Read more

White Pine Award 2022 — Shortlisted
During a sweltering summer, Dills must come to terms with a horrific crime and the parent he loves who committed it.

Dills and his mom have returned to Hamilton, her hometown, hoping to leave the horrors of Windsor behind. But it’s impossible to escape the echoes of tragedy, and trouble always follows trouble.

When Dills hurts a new classmate, it comes out in court that he was in the Windsor High library when the shooter came in. But he won’t talk about what he saw, what he still sees whenever he closes his eyes. He can’t. He definitely can’t tell anyone that the Windsor Shooter is his stepfather, Jesse, that Jesse can speak into his mind from hundreds of kilometres away, and that Dills still loves him even though he committed an unspeakable crime.

Brent van Staalduinen lives, works, and writes in Hamilton, Ontario. He is the recipient of both the 2015 Bristol Short Story Prize and the 2015 Short Works Prize, his work appears in The Sycamore Review, The Bristol Prize Short Story Anthology 8, EVENT Magazine, The Dalhousie Review, The New Quarterly, and The New Guard Literary Review . A graduate of the Humber School of Writers, he also holds an MFA in Creative Writing from the University of British Columbia and teaches writing at Redeemer University College.

I plead guilty, of course. It’s the only option. No one else used a box cutter on Patrick Scheltz ten days ago. In math class. During the last regular period before our end-of-year exams. Now, I’m not that great at math, but these numbers are easy. Eight stitches. Twenty-seven witnesses. Seven days before summer freedom. One thousand times I’ve told myself how dumb it was to lose my cool.

The youth-court judge, a stern-looking woman no one in their right mind would mess with, asks me if Iunderstand the consequences of pleading guilty. I nod, but she makes me say it out loud.

“I understand, Your Honour. ”

Then she clears the courtroom of everyone but me, Mom, the lawyers, the court reporter, my youthworker, and the bailiff, who sits in the chair at the end of my table. Even Gramma Jan and Aunt Viv haveto go. The prosecution lawyer starts to object — he thinks Patrick and his parents should be allowed tostay — but the judge silences him with a look over her reading glasses.

“I’ll bring them back for sentencing, but there’s something I need to talk to Wendell and his mother about first. ”

First time she’s called me Wendell. Until now, I’ve been “the defendant. ” I think about what that could mean as I watch everyone file out of the courtroom. Patrick — who everyone calls Pat, which he hates — glares at me as he leaves. A single person remains in the gallery, a woman who’s been scribbling madly in her notebook the entire time.

The woman frowns but gets up without another word and leaves. The judge sighs and nods at the bailiff. “Watch the door, please. I don’t want anyone ‘accidentally’ bursting back in. ”

I can tell the judge is talking about Walters, a reporter from the local paper — which my mom calls“that right-wing rag” — who lives in my neighbourhood. The bailiff gives a small smile and heads to the door. He shares the judge’s opinion.

The judge removes her reading glasses, looks down, and takes a long, deep breath. Her eyes are softer when she looks up and over at the table where I’m sitting. I’ve seen that kind of look before. It’s how people who weren’t there look when they talk about it. All helplessness and sadness. She’s going to talk about Windsor. My lawyer brought it up in my defence, but I was hoping it would stay locked up in the court records. But no. Now the judge will say my full name again and want me to talk about it.

But I won’t. I won’t tell anyone. Not in a way they want, anyway. I have memories that live inside my head that are just for me. I was in the Windsor High library when the shooter walked in and opened fire. I didn’t see much while it was happening. I was behind a table with my eyes closed. I heard the angry sounds of the bullets destroying everything around me. And the other noises I can’t talk about. We all did.

The shooter was my stepdad, Jesse. I found that out later, at home, at the same time my mom did. Whenthe police came to interview her. And me. I also found out that Jesse went to my classroom first. I don’t know why. He didn’t leave a note or anything. After the shooting, in the strange quiet of our house, I tried to figure it out. Mom hid the TV remote, but there were dozens of reconstructions on the internet. Hashtags and protests and rage and so many people wanting to fight. So much information but so few answers. Computer-generated animations and diagrams and arrows and dotted lines and red X’s wherever someone had died. Kids and teachers. The horrible math of it. But I can’t say that number. I hope that’s all right.

“A few things have come to light since you were charged,” she says, “including the fact that you were atWindsor High School on the day of the shooting. When I call everyone back in, I’m going to pass sentence, but I wanted to tell you in private how sorry I am for what you’ve gone through. And how much I respect your mother for bringing you home to Hamilton for a fresh start. I’ve spoken to your math teacher and principal — who both speak very highly of you — and we talked about your situation. They, of course, had no idea. ”

I sneak a look back at Mom. She’s leaning forward on the gallery bench, her arms folded, looking at thejudge with narrowed eyes. My lawyer using Windsor is one thing, but Mom won’t like that the principal and my teacher know, too. She made me promise not to say anything to anyone, not that I would. Not that I can. I turn back to the front of the courtroom. The judge is still talking.

“You’ll be relieved to hear that your expulsion has been reversed and you’ll be allowed to graduate fromgrade ten after all. Quietly, of course. They feel that this one mistake shouldn’t keep you from moving forward. I agree. Your school records will be filed away with full confidentiality, which is important to you and your mother. By law these court records will also be sealed. Wendell, I sincerely hope you and your mom can find some peace here. You’re a strong young man, and I’m lucky to have met you, despite the circumstances. ” She leans back and puts her glasses back on. “That said, you broke the law, so what happens next is very, very important. ”

And with that the judge nods at the bailiff and he opens the door and everyone comes back in. I force my eyes to stay open to keep them dry. I never cry, but I get close a lot. My eyes fill all the time. I can’t look back at Mom right now because she’ll be a mess. Like me. I can’t hear the word Windsor without my insides twisting themselves into ropes. But she feels it worse. She feels everything.

Brent van Staalduinen has once again created an unforgettable character and voice. In Dills, he brings forth our seething, hurting unpredictability along with all of our innocence, reminding us that love is that thing which complicates us and yet also, ultimately, makes us who we are. Nothing but Life is a gentle and yet razor-sharp look into what hurts and heals us, filled with a wisdom that permeates every sentence.

... by writing with much seriousness, Brent van Staalduinen makes the reader realize that a story about a young man reclaiming his life rather than living it as the legacy of his stepdad's military PTSD or his own trauma associated with the shooting is sombre and requires thoughtfulness and compassion.

van Staalduinen does an excellent job of capturing a teen voice and capturing Dills's emotional and challenging journey towards healing.

As Dills tells his story and shares the worst and weirdest summer of his life, it feels deliciously like eavesdropping. A compelling read.

In Nothing but Life, Brent van Staalduinen offers readers what the news often fails to provide in the wake of a mass shooting — what remains in the aftermath beyond sensationalism and how those affected grieve. In following a young boy and his family's journey toward healing after someone they love commits unthinkable violence, this novel sings with sorrow, yes, but also with great empathy and love.

Capturing perfectly the tender chaos of adolescence, Nothing but Life grabs you by the heartstrings and won’t let go. Beautifully written and satisfyingly redemptive.

Well-balanced with doses of humour, the plot and cast of characters are likely to capture and maintain readers' interest, qualities that make it likely to be much enjoyed by the target audience. Recommended.

It’s no surprise that Nothing But Life is receiving so much well–deserved attention. It is a must–read, not just for its YA audience, but for any adult working with teens.

A lovely examination of how families can break and heal over time . .. a great read.

van Staalduinen writes with clarity and ease . .. A moving portrayal of a complex situation that will appeal to teenagers mature enough to read about school shootings. 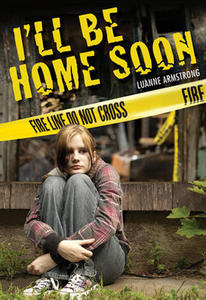 In some ways, such forms of children's literature are returning to their roots. Much of what has been, or is still thought of as “children’s literature” has been bound up in the mythical, in fairy tales, in stories involving a misty Middle Ages era full of faeries, werewolves, ... Read more

Other titles by Brent van Staalduinen