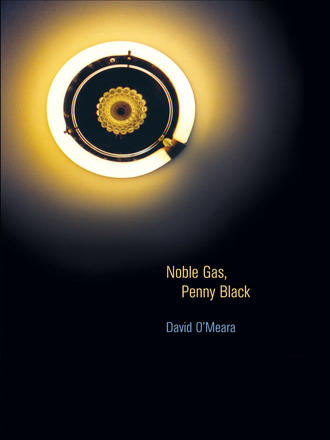 Winner of the 2009 Lampman-Scott Award (for the best book of poetry in the National Capital Region) and shortlisted for the 2009 ReLit Award Lucid accurate detail and music at every turn.Many of the poems in Noble Gas, Penny Black explore the subject of departure and arrival, ... Read more

Winner of the 2009 Lampman-Scott Award (for the best book of poetry in the National Capital Region) and shortlisted for the 2009 ReLit Award Lucid accurate detail and music at every turn.Many of the poems in Noble Gas, Penny Black explore the subject of departure and arrival, an ongoing theme in David O’Meara’s work. Travel – being between places, in stations and airports and unfamiliar cities – creates a psychological, emotional space rife with reassessment, where the individual dwells simultaneously in the future and in the past. At the same time O’Meara imbues the domestic with a similar compelling transience, in poems on love and current events, where “History’s narrowed eye” roams landscapes “felt / but never held, like wind over water.” O’Meara give us lucid, accurate detail and music at every turn, and is entangled enough with the world to make us ache. "[There are] lines from Noble Gas, Penny Black, where the syllables are, let me incautiously say, near-perfect."-Don Coles

David O'Meara lives in Ottawa, Ontario. He is the author of three collections of poetry and a play, Disaster . He's been shortlisted for the Gerald Lampert Award, the ReLit Prize, the Trillium Book Award, a National Magazine Award, four Rideau Awards, and he won the Archibald Lampman Award twice. His most recent book is Noble Gas, Penny Black (Brick Books, 2008). He is director of the renowned Plan 99 Reading Series and wasthe Canadian judge for the 2012 Griffin Poetry Prize.

"Noble Gas, Penny Black belongs in the small cluster of great poetry being produced in Canada these days. It's formally challenging. It's confident in its style. It's ‘the commonplace’ in praxis. And it's a defense — timely —of love and togetherness."--Alessandro Porco, Canadian Notes & Queries

"O'Meara's technique is generally subtle and understated — reminding me of the best work of Don Coles ... — serving, rather than submerging, the poems' subjects...His skill, insight, and discipline make the collection richer with each re-reading."--Zachariah Wells, Quill and Quire

" ... A muffled world of heaviness shot through with yearning and great attention to detail ... a poet that I'll gladly read, not just for his skill with the line, with syllables, and with that sleight imagistic hand, but for the big-heartedness of the work, and how he lays that heart over very real things, lovingly and precisely rendered."--Sina Queyras, Lemon Hound

Other titles by David O'Meara