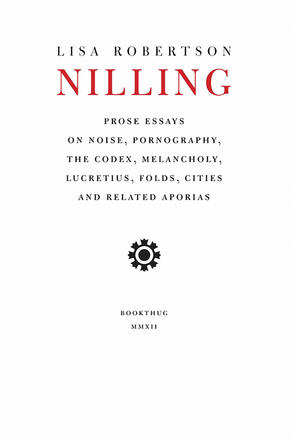 Nilling is a sequence of 6 loosely linked prose essays about noise, pornography, the codex, melancholy, Lucretius, folds, cities and related aporias: in short, these are essays on reading. Lisa Robertson applies an acute eye to the subject of reading and writing—two elemental ... Read more

Nilling is a sequence of 6 loosely linked prose essays about noise, pornography, the codex, melancholy, Lucretius, folds, cities and related aporias: in short, these are essays on reading. Lisa Robertson applies an acute eye to the subject of reading and writing—two elemental forces that, she suggests, cannot be separated.

For Robertson, a book is an intimacy, and with keen and insightful language, Nilling's essays builds into a lively yet close conversation with Robertson's "masters": past writers, philosophers, and idealists who have guided her reading (and writing) practice to this point.

If "a reader is a beginner," then even regular readers of Robertson's kind of deep thinking will delight in the infinite folding together of concepts—the codex, pornography, melancholy, cities—that on their own may seem banal, but in their twisting intertextuality, make for a scintillating study of reading as a deep engagement.

"I felt myself hypnotically inducted into the whirling galaxy of this book, one of whose foci, indeed, is the mechanism (although that is too cold a word)—the miracle, really—of reading .... I should have been a proper scholar, I think ruefully, reading this." —Nada Gordon

"It is poetry where there is still the possibility of imagining language differently, and it is by reading that we bring the possibility of that freedom into our lives. The practice of reading she has spent the book developing, sometimes subtly, indirectly and sometimes overtly, finds its reason here... In these pages it becomes a practice of profound openness. It is, first of all, a disciplined putting aside of the self, and the act of reading a way of allowing something else to settle into its place. This is the openness. It is an intimacy, an act of allowing another's language to settle deep inside you, to mingle with your most delicate parts." —Alan Reed for Lemon Hound

"As we’ve come to expect, Robertson's language is luxuriously lyrical and a pure pleasure to read, regardless of what she has to say ... But there are real depths of thought here—form and content never leave each other for too long in this dance—and there is a wonderfully idiosyncratic drift in the direction of Robertson's argument that does indeed read more like a novel than most essays we are used to now." —Stephen Collis, Jacket 2