To both celebrate his career and continue his passionate efforts to encourage and support the practice ... Read more

To both celebrate his career and continue his passionate efforts to encourage and support the practice of journalism, St. Thomas University has held the annual Dalton Camp Lecture in Journalism since 2002. In cooperation with CBC Radio's Ideas, the series has become an annual highlight for listeners across the country.

Now, for the first time, the Dalton Camp Lectures have been gathered together in one remarkable compilation. Commencing with the foundational address "The Best Game in Town" by journalist and social activist June Callwood, about her love affair with journalism, and ending with the 2013 lecture "The Next Big Thing Has Finally Arrived" by New York Times business, media, and culture writer David Carr, the contributors collectively forecast the future of news and the public discussion of ideas in a vastly changing world. 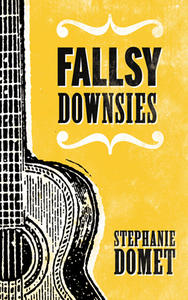 Under the Cover: Who is Lansing Meadows?

Fallsy Downsies by Stephanie Doment, published by Invisible Publishing, is about aging rocker Lansing Meadows and his last road tour. Stephanie herself is about to hit the road, touring the book through southern Ontario from November 29th - December 4th. Before Stephanie hits ... Read more