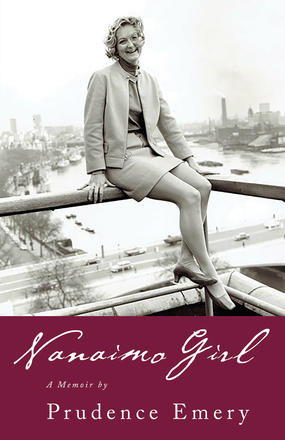 “Reading Nanaimo Girl is like enjoying a martini or three with Auntie Mame. The stories are colourful, global, boozy and just cheeky enough to make you envious — and at the same time a little concerned. ” — Dana Gee, Vancouver Sun

“Reading Nanaimo Girl is like enjoying a martini or three with Auntie Mame. The stories are colourful, global, boozy and just cheeky enough to make you envious — and at the same time a little concerned. ” — Dana Gee, Vancouver Sun

Born in Nanaimo, British Columbia in the 1930s, Prudence Emery was expected to do the right things, but shattered family expectations by going to art school in London, England, where studies sometimes took a back seat to partying. And then she found herself in the world of celebrities.
From Expo 67 in Montreal to the press office at London's Savoy Hotel, Prudence met the likes of Twiggy, Noël Coward, Louis Armstrong, Petula Clark, Liza Minelli, and Edward Albee. She escorted David Frost to an interview with Sheikh Mujibar Rahman and arranged for Pierre Trudeau to attend a party where he met Barbra Streisand for the first time. It was a world so rich with stories that the Canadian Press wrote, "If ever a job was tailor-made for a book of memoirs, Prudence Emery has it. "

But it was just the beginning. A new career as a film publicist spanned decades and introduced her to some of Hollywood's biggest names, from Sophia Loren to Jennifer Lopez, from Peter O'Toole to Matt Damon. She worked with Nicolas Cage when he was a nervous teenager and later when he was an outgoing superstar. And she was a frequent colleague of famed director David Cronenberg.

Nanaimo Girl is the story of a life well lived and an encouragement to all, young and old, to get out, defy expectations, and have a rip-roaring good time.

Prudence Emery was born in Nanaimo, educated in Vancouver, then lived in London, UK, and Toronto, before moving to Victoria, BC.

“Memoirs, as with all forms of autobiography, are complicated animals, good ones even more so. Many historical accounts of a personal nature, written and verbal, tend to drift into “I went here, I saw this, I did that” – and in places, Nanaimo Girl is no different. What sets Pru’s entertaining stories apart, however, is that there are so many of them. The result is that I found myself asking, “Where’s she going now? What’s she doing? What happens next? And of course, that’s the perfect chemistry of a page-turner. The Beatles once sang: ‘Dear Prudence, won’t you come out to play?’ And play she did. What a life!”

“These are bleak times, for sure, so a memoir from someone who merrily defied expectations is welcome. ”

"There is no ‘blah, blah, blah’ in this book. Reading Nanaimo Girl is like enjoying a martini or three with Auntie Mame. The stories are colourful, global, boozy and just cheeky enough to make you envious — and at the same time a little concerned. "

"Full of fun and raucous tidbits about celebrity personalities, on-set moments, gaffers and gaffes, Emery gives a fascinating look into a life well-lived. "

“This breezy behind-the-scenes showbiz read is a reminder that even the brightest stars like to touch ground and get invited to play. ”